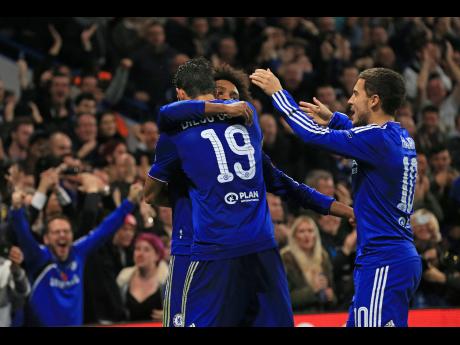 Chelsea and Roma scored late goals to earn crucial victories in the Champions League yesterday, improving their chances of advancing to the knockout stage.

Zenit St Petersburg secured their place in the round of 16 with a win at Lyon, while Barcelona, Bayern Munich, Porto, and Olympiakos also won yesterday, staying on track to advance.

Arsenal remain in trouble and are on the brink of elimination after losing 5-1 to Bayern Munich in Germany.

Neymar and Luis Suarez continued their excellent scoring form to make up for the absence of Lionel Messi and help Barcelona move closer to the round of 16 with an easy 3-0 win over BATE Borisov.

Barcelona lead the group with 10 points, five more than Roma, which moved into second place thanks to the late 3-2 win over Leverkusen, which stayed on four points, one more than BATE.

"The aim was to win, and the victory gives us a great chance to seal our qualification," Barcelona midfielder Andres Iniesta said.

Leverkusen had rallied from two goals down to draw level with Roma before captain Omer Toprak was shown a red card for pushing Mohamed Salah inside the area, prompting the penalty that Pjanic converted for the victory.

"We absolutely had to win and we did," Pjanic said.

Thomas Mueller scored two goals as Bayern Munich dominated Arsenal in a 5-1 win in Bavaria, while Felipe Pardo scored both goals for Olympiakos as they rallied to beat 10-man Dinamo Zagreb 2-1. Bayern and Olympiakos reached nine points, while Arsenal and Dinamo stayed with three each with two games remaining.

Robert Lewandowski opened the scoring for Bayern in the 10th minute, Mueller doubled the lead in the 29th and David Alaba made it 3-0 in the 44th. Arjen Robben scored with his first touch of the ball in the 55th, less than a minute after coming off the bench, and Mueller added his second in the 89th.

Olivier Giroud pulled one back for Arsenal in the 69th.

Willian produced a late winner as Chelsea fans put on a show of support for embattled manager JosÈ Mourinho, scoring from a free kick to earn a 2-1 victory over Dynamo Kiev.

"From the mental point of view, it was important," Mourinho said. "A reaction to a negative moment."

Chelsea rose to second in the group with seven points, two more than Dynamo. Porto, which moved closer to a place in the knockout stage after easing to a 3-1 victory at Maccabi Tel-Aviv, have 10 points.