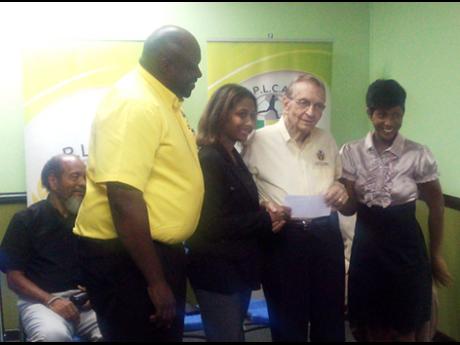 The Jordan Foote story is a tear-jerker. Instead of enjoying his last year of high school football eligibility, Foote has been stricken by cancer. The Holy Trinity High School standout has fought many battles on the field of play. Now, he is fighting for his life.

When we watch, read, and listen to our favourite sports, we escape the cares of the world. During that game or meet, it doesn't matter that the dollar is going for US$119 to one or that crime statistics are high. However, every now and again comes a set of circumstances that remove sport from the realm of entertainment.

Last year, the death of 17-year-old Jamaican, Cavahn McKenzie, at the end of a cross-country race in Trinidad and Tobago, jolted us all. His death by heart-related problems put us all face to face with one of the major threats to Jamaican lives.

Jordan's plight falls into that category. Thankfully, the Premier League Clubs Association (PLCA) and St Catherine Cricket Club have come to Jordan's aid. It's commendable and logical that the PLCA, a football organisation, would help. But it's a sign of how Jordan's case has touched people that a cricket club would leave the crease to assist.

St Catherine won the recently concluded national 50-over title and have graciously pledged a portion of their $500,000 prize money to help the Holy Trinity student/footballer.

It's the kind of help Jordan can really use. Cancer care is hugely expensive and strength of cash is a huge contributor to survival. That's probably an additional reason that cancer kills so many Jamaicans.

In his favour, Jordan is young and fit. I'm no doctor, but with help and the right treatment, he has a chance. Hopefully, other entities will come to his side.

Track and field standout Novlene Williams-Mills fought her battle with her family at her side. Together, they produced heart-warming results.

Jordan Foote and his family have reached out for help. As a nation, we dare not let him down.