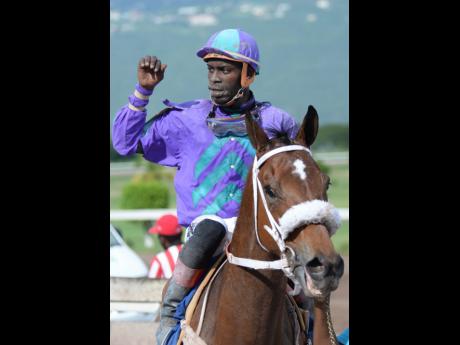 Jermaine Barnaby
Linton Steadman aboard recent winner STIR IT UP.

Hot apprentice Linton Steadman stole the show at Caymanas Park yesterday, becoming the first from the recent batch of Jockeys' School graduates to ride a triple.

A past student of Waterford High, Steadman, 25, duly made amends for not landing his first triple last Saturday, when one of his winners, DOC HOLIDAY, was disqualified by the stewards after passing the post first in the seventh race over 1500 metres.

The disqualification did not prevent him from emerging the CTL Jockey of the Month - with eight winners - winning the incentive in only his first full month in the saddle, having ridden for the first time on September 26.

The popular young rider has so far ridden 13 winners to become the fastest apprentice to reduce his claiming allowance from 4.0kg to 3.0kg.

On a day when the apprentices dominated by winning seven of the 10 races, Steadman said he was happy with his form.

"I was looking forward to taking the triple last Saturday, but Doc Holiday was unfortunately disqualified.

"Today, everything fell into place, and I can't wait to get back into the saddle on Saturday. Right now, I want to win every race, and with this kind of focus, I should continue to do well," said Steadman, who is apprenticed to 14-time champion trainer Wayne DaCosta, who gave him his first winner, VISION, on September 26.

Fellow apprentices Odean Edwards and Bebeto Harvey rode two winners each, Edwards just missing a triple when the Richard Azan-trained ABBEY ROAD (5-2) was beaten by a nose in a tight photo finish by the Shane Ellis-ridden favourite, BONGO KING, in the eighth race over 1600 metres.

Harvey, meanwhile, made all aboard the Robert Darby-trained 4-5 favourite, FORCE DE JOUR, in the ninth race (high claiming) over 1100 metres - the 4-y-o colt recording his sixth consecutive win.