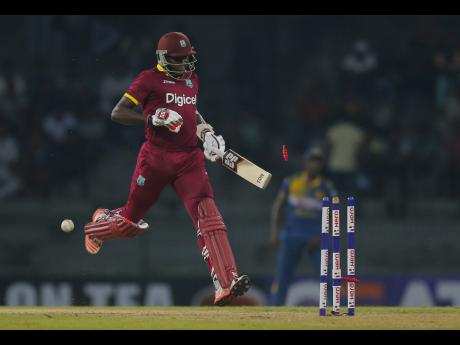 West Indies' disappointing tour of Sri Lanka continued here yesterday, when they plunged to an eight-wicket loss in the second one-day international (ODI) to tamely concede the three-match series.

In another rain-affected encounter at the R Premadasa Stadium which was reduced to 38 overs per side, West Indies rallied to 214 all out off their allotted overs and watched helplessly as the hosts raced to their adjusted target of 225, with nine balls remaining.

Opener Kusal Perera put the tourists to the sword before falling agonisingly for 99, while Lahiru Thirimanne saw Sri Lanka over the line with an unbeaten 81.

The pair put on 156 in a busy second-wicket stand which killed off West Indies' hopes of levelling the series, after they had claimed dangerous opener Tillakaratne Dilshan cheaply for 17 with the score on 40 in the fifth over.

West Indies had been earlier bailed out by half-centuries from opener Johnson Charles and stand-in captain Marlon Samuels, after enduring another poor start.

Charles blasted 83 off 70 deliveries, while Samuels controlled the innings with 63 off 61 balls, with left-hander Darren Bravo chipping in with 21.

Off-spinner Milinda Siriwardana was the best bowler with two for 27, while speedster Lasith Malinga snared two for 43.

West Indies lost Andre Fletcher to the second ball of the innings without scoring, edging a defensive push at Malinga behind with a single run on the board.

Jermaine Blackwood then failed to make any impression on his ODI debut, spending 15 balls over his nine before attempting to go over the top with off-spinner Sachithra Senanayake and being held by Siriwardana running backward at mid-on.

Tottering at 29 for two in the fifth over, the Windies were rescued by Charles, who put on 70 for the third wicket with Bravo, and then another 40 runs for the fourth wicket with Samuels.

The right-hander struck seven fours and four sixes, playing with ease against both pace and spin. He cleared long on with Senanayake in the seventh over for his first six and raised West Indies' 50 in the following over by pulling pacer Suranga Lakmal to fine leg for four.

Charles brought up his fourth ODI half-century in style in the 12th over, sweeping spinner Ajantha Mendis fine for four to move to 46 before lifting the next delivery over long on for six.

Bravo had struck a single boundary off 33 deliveries when he picked out Dilshan at mid-wicket off Siriwardana at 99 for three in the 16th over, and Charles was in sight of his third ODI century when he missed a sweep at the same bowler and perished lbw in the 24th over.

West Indies were then held up by a three-hour rain break at 149 for four in the 27th over and when play resumed, they had all of 11 overs to give Sri Lanka a competitive total to chase.

They quickly lost Jonathan Carter for five and Jason Mohammed, in his first ODI in four years, fell for four, as the Windies stumbled to 169 for six in the 32nd.

Carlos Brathwaite blasted a four and a six in 17 off 13 balls but, importantly, added 42 for the seventh wicket with Samuels, who managed to reach his first half-century of the tour and the 26th of his ODI career.

Once Samuels was run out in a mix-up with Brathwaite at 211 for seven in the 37th over, the Windies wilted with the last four wickets going down for just three runs.

R Rampaul not out 1

L Thirimanne not out 81

D Chandimal not out 15

Man of the Match: Kusal Perera.