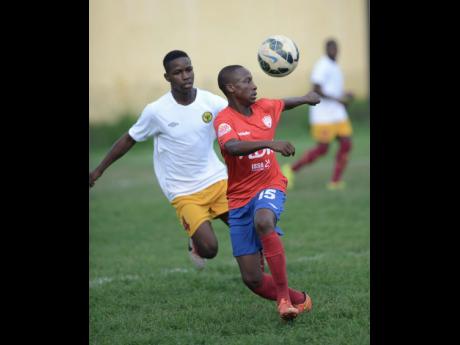 Lloyd Reynolds of Holy Trinity (right) tries to control the ball while Wolmer's Joshua McNaught closes in to tackle during their ISSA/FLOW Manning Cup match at Constant Spring yesterday.

Defending champion Jamaica College (JC) and Wolmer's both stayed in contention for a place in the semi-finals of the ISSA-FLOW Manning Cup following wins over Vauxhall and Holy Trinity, respectively, in Group H at the Constant Spring field yesterday.

The champions were reduced to 10 players when Ajanica Talbott was red-carded in the 43rd minute after denying Tyane Wilson a clear goal-scoring opportunity.

Fouled after the break

But Ronaldo Brown gave JC the lead when he converted from the penalty spot after Khori Edmond was fouled in the area minutes after the break.

The results leave Wolmer's atop the group with maximum six points with one round of games to go. They are followed by Jamaica College on four points. Holy Trinity have one point and Vauxhall none.

Wolmer's and Jamaica College will meet in the final group game on Monday at the same venue to decide who gets the top spot from the group.

Although Jamaica College only got their goals after going a man down, coach Miguel Coley thought they were better throughout the contest and deserved the victory.

"It wasn't a matter of getting better, it was about the fact that we started scoring. We had 11 chances in the first half, and in the second-half also we hit the bar twice before we scored.

"So we are playing good football and creating the most chances in the Manning Cup, but we are not converting them," he said.

Wolmer's coach Vassell Reynolds said he anticipated that they would have a very tough day.

"It was a crucial win although we left it late. We started poorly and let in an early goal, but we got back the equaliser in short order. It was a risky game, but we created enough chances to put away the game," he insisted.

- Click the link below for more Schoolboy Football photos.