Royal Assault for Ronron Trophy in horseracing at Caymanas Park 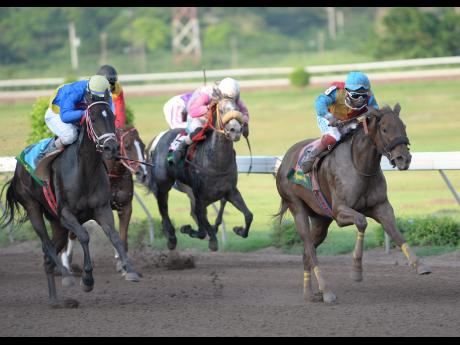 The inaugural running of the Ronron Trophy, in honour of the crack imported filly who won a string of grade-one races for trainer Gary Subratie and owner Kenval Wallace some years ago, is the feature event at Caymanas Park today.

The race, a restricted stakes at 1200 metres (non winners of three), will be contested by 12 starters and offers cash incentives to the winning trainer, jockey and groom, thanks to Wallace's contribution.

ROYAL ASSAULT, who has good speed, has won three races from eight starts, most recent on September 9, staving off fast-finishing WINGS OF HOPE by half a length in a fast-run 1100-metre race.

Since then, ROYAL ASSAULT finished a good second from a bad draw to LONG RUNNING TRAIN in a fast-run straight-five race. Returning the convenient mark of 51.0kg, by virtue of Steadman's 3.0kg claiming allowance, he will not go down easily given these favourable conditions.

He can expect stiff competition from the August 8 TOBA Trophy winner, ROAD WI SEH and WINGS OF HOPE. All three are in good nick and should give good account of themselves. ROYAL ASSAULT, however, should rebound and take home the trophy.

Other firm fancies on the card are Wayne DaCosta-trained VISION OF GOLD to go one better in the Abbie Grannum Memorial Cup over 1400 metres for native bred two-year-olds; TWILIGHT ROCKET, to finally get it right with Ellis aboard in the opening race over 1300m for maiden four-year-olds and up; stretch-running COLD GROUND, to catch UNBREAKABLE in the fourth over 1820 metres; as well as BLACK BOY in the fifth; and down-in-class DI COBRE are also among the hopefuls to catch speedy WINESHA in the seventh over the straight-five course.