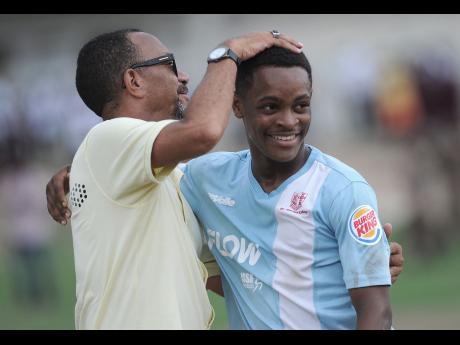 Since the first round of the ISSA/FLOW Manning Cup ended, St George's College (STGC) has been in unstoppable form, playing some scintillating football, dominating games with flair and panache and virtually scoring at will.

Although the North Street-based school has shown a tendency to give up goals, their open style of football is not too much of a worry for coach Neville 'Bertis' Bell, who is confident that as long as they stay true to their passing game and continue working as a team, they will be hard to beat.

STGC will face St Jago - a team they have already beaten twice this season, in today's ISSA-FLOW Super Cup semi-final at Sabina Park at 6 p.m.

"Not really (concern about defence). I know this team, and once they settle down, we will do well," Bell said.

In the last Super Cup game against Glenmuir, which ended 3-2, the Georgians conceded an early goal in each half, and although Bell admitted it's something they have to look at, he has full confidence in his players' abilities.

"When we play our passing game, we play well. They (Glenmuir) caught us very early, but I can live with that. It was like two seconds in the game when they scored, same thing in the second-half. It never happen to us before but it is something we have to talk about and it could have hurt us more than it did," he reflected.

Alex Marshall and Shevon Stewart have been the outstanding players for Bell's team this season, but the charismatic coach insists it will take a team effort if they are to get by St Jago today.