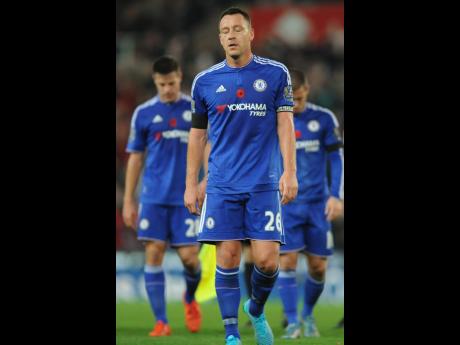 Mourinho missed the away game after receiving a stadium ban for his behaviour towards match officials in a 2-1 defeat at West Ham in October.

Also, Manchester United ended their Premier League scoring drought with a 2-0 win over West Bromwich Albion, while Leicester striker Jamie Vardy scored for the ninth straight League match in a 2-1 victory against Watford. Newcastle, meanwhile, moved out of the relegation zone following a 1-0 away win against Bournemouth.

After a fiercely fought first half, Mark Hughes' Stoke broke the deadlock when Marko Arnautovic scored with an acrobatic effort in the 53rd minute.

Chelsea poured forward in search of an equaliser and Pedro was denied when his left-footed shot cannoned back off the post with goalkeeper Jack Butland beaten.

At Old Trafford, Jesse Lingard broke the deadlock with his first goal in United colours, curling an effort beyond West Brom goalkeeper Boaz Myhill within minutes of the restart.

ALL WILL GET A CHANCE

"I give every player a chance - always. When you are in my squad, I will give you a chance. He grabbed it with both hands," manager Louis van Gaal said of his scorer.

United doubled their lead in second-half stoppage time from the penalty spot after Anthony Martial was felled by Gareth McAuley. The West Brom defender was shown a straight red card and Juan Mata converted the resulting spot kick.

Foxes forward Vardy showed his predatory instincts after netting his 12th goal of the campaign from the spot to double his side's lead after Ngolo Kante gave Leicester the early advantage. Troy Deeney's penalty reduced the deficit, but the home side held on to move up to third in the table.

Vardy needs to score in one more game to equal Ruud Van Nistelrooy's 12-year record. The former Manchester United striker set the Premier League record in 2003, with 10 goals in as many games.