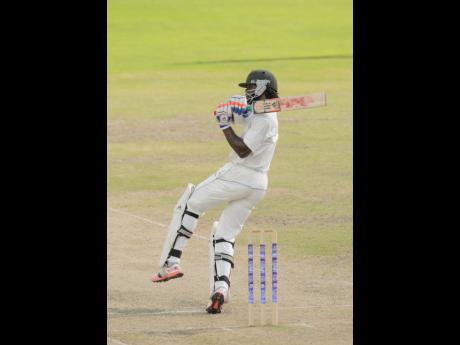 Out-of-favour West Indies batsman Kirk Edwards capitalised on familiar conditions to stroke an unbeaten half-century and lead a Jamaica Scorpions fightback against Barbados Pride on the second day of their opening round match in the Regional First Class Championship yesterday.

Edwards, the 31-year-old Barbadian who was drafted by Scorpions to bolster their batting, was unbeaten on 51 as the visitors finished the day on 114 for two in response to the hosts' 373 all out.

A former Barbados captain, Edwards revelled in the familiar conditions at Kensington Oval, stroking six fours in an innings spanning 120 deliveries and 144 minutes.

He put on 78 for the second wicket with opener John Campbell, who made 49, a partnership which pulled the Scorpions around from 10 for one - when captain Paul Palmer was leg before wicket to pacer Miguel Cummins first ball - in the second over of the innings.

Campbell, unbeaten on 18 and Edwards, 12, carried Scorpions to tea at 31 for one before pushing on afterward to put precious runs on the board.

The 22-year-old left-handed Campbell struck seven fours off 85 balls in two hours at the crease before nicking seamer Kevin Stoute behind as close of play beckoned.

Earlier, Scorpions produced a disciplined effort to ensure Pride lost their last eight wickets for 111 runs to be bowled out just under an hour before tea.

Resuming on 262 for two, Pride lost captain Kraigg Brathwaite, who added just eight to his overnight 111, before falling to a catch at the wicket off fast bowler Jason Dawes.

His overnight partner, Shamarh Brooks, was first to perish, failing to add to his 49, as he went lbw in the day's second over to Dawes, who finished with three for 51.

Left-arm spinner Nikita Miller, however, was the main destroyer with four for 100 from 53 overs. He removed the dangerous Roston Chase, who hit 48 off 102 deliveries with five fours and added 64 for the sixth wicket with Stoute, whose 34 required 70 balls and included five fours.

AT THE GUYANA NATIONAL STADIUM: Windward Islands Volcanoes, replying to Guyana Jaguars' 362 all out, were 127 for two at the close on the second day.