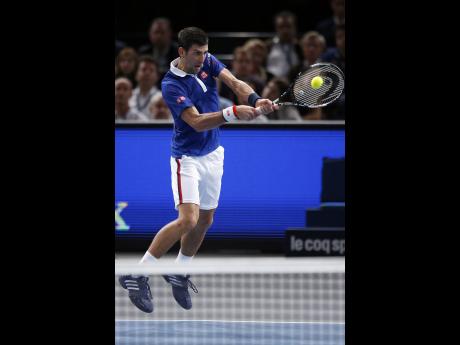 Novak Djokovic beat Andy Murray 6-2, 6-4 to win the Paris Masters for the third straight year and a record fourth time overall, dominating the second-seeded Briton from the outset in a one-sided final.

The top-ranked Serb was largely untroubled clinching his 10th title of the season - four ahead of Roger Federer and six more than Murray. It was the 58th title of his career and 26th in Masters events, two more than Federer and one behind leader Rafael Nadal.

"I think I was very solid from the very first point, really protecting the baseline, trying to be the one that dictates the play," the 28-year-old Djokovic said. "I think in terms of physical and mental ability, I have reached my peak."

Djokovic also extended his winning streak to 22 matches and will be the favourite to win the season-ending ATP finals for the fourth straight time when that tournament starts in London on November 15.

"There is no reason for me to decrease the pace of the training and preparations," the 10-time Grand Slam champion said. "Hopefully, I can finish off the season with another great win."

Despite dropping only one set on the way to the final, Murray simply could not compete as Djokovic won his sixth Masters title of the year - setting a new record.

"It's been an incredible year for him. Well done!" Murray said. "I missed with my backhand a little bit today, left a few too many in the middle of the court, and he was able to dictate a lot of the points from there."

Serving for the match, Djokovic clenched his fist and yelled when Murray's return landed out to give him match point. When Murray's aggressive two-handed backhand went just wide, he turned and blew a kiss to his coach, Boris Becker, who has won this event three times.

In their 30th career meeting, Djokovic improved to 21-9 against Murray, a two-time Grand Slam winner who beat the Serb in the 2013 Wimbledon final.

But since then, Djokovic has won 10 of their 11 encounters. His only loss during that spell was in August, when Murray beat him in the Rogers Cup final in Montreal.

"Since the beginning of last year my results against him and Roger haven't been good enough," said Murray, who will attempt to lead Britain to the Davis Cup title against Belgium later this month. "I need to think about why that is and what I can do to turn it around."

The second point of the match lasted 22 strokes, but Murray was rarely able to compete in the rallies after that.

Djokovic broke Murray at love in the third game, and the Briton had to save three break points in the fifth. Djokovic then held at love and broke again before serving out the set in 42 minutes.

Murray dropped his serve again to trail 2-1 in the second set but broke right back, only for Djokovic to get another break in the seventh game when the Briton's forehand sailed long.