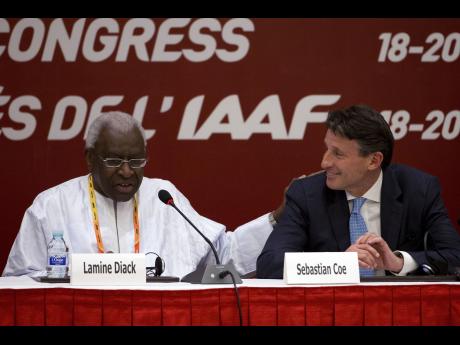 AP photo
In this August 19 file photo, International Association of Athletics Federations outgoing president Lamine Diack (left) speaks next to newly elected president Sebastian Coe during a press briefing at the IAAF Congress at the National Convention Center in Beijing.

The IAAF is giving Russia until the end of the week to respond to damning allegations of state-sponsored doping before the world governing body decides whether to suspend the country from international competition.

IAAF President Sebastian Coe said today he had initiated the process of considering sanctions against Russia in the wake of the report by a World Anti-Doping Agency commission that accused Russia of systematic doping and cover-ups.

"The allegations are alarming," Coe said. "These are dark days."

The International Association of Athletics Federations will consider suspending the Russian federation, a move that could keep Russia's track and field athletes out of next year's Olympics in Rio de Janeiro.

"I asked the Russian federation to report back to us by the end of the week," Coe said in a conference call with a small group of reporters. "I want an explanation for the allegations that have been made today. That will allow my council to make a judgment about what the next step is."

In this February 21, 2014 file photo a man walks past a sign reading doping control, at the Laura biathlon and cross-country ski center, at the 2014 Winter Olympics in Krasnaya Polyana, Russia. – AP Photo

The report by the WADA-appointed panel, headed by Dick Pound, recommended that Russia be suspended until it cleans up its act and fully complies with the World Anti-Doping Code.

In an interview yesterday with The Associated Press, Coe had discounted – though not completely ruled out – the possibility of suspending Russia, saying he supported "engagement not isolation."

But after going through Pound's 323-page report on today, Coe had a change of heart. He said the allegations were beyond what he was expecting.

"The report today, the seriousness of what is being said, told me I need to seek council support to start the process to consider possible sanctions," Coe said. "That is not to say we have presupposed or prejudged but we need to understand more about this."

"We will act very quickly," he added. "It could lead to a provisional suspension."

In a written statement, the governing body said sanctions against Russia could include "provisional and full suspension and the removal of future IAAF events."

Asked whether the report drew parallels with state-sponsored doping in the former East Germany, Coe said: "I'm not benchmarking against anything. I will do everything I can to protect the clean athletes. This is non-negotiable."

In Geneva, Pound said there may still be time for Russia to avoid a ban from the Olympics, if it starts reforming immediately. That work that will take at least "several months" and "there are a lot of people who are going to have to walk the plank before this happens," he said.

"I think they can do it. I hope they can," Pound added.

The report did not delve into the criminal charges lodged against Lamine Diack, Coe's predecessor as IAAF president. Diack and two other people, including the IAAF's former anti-doping manager, were detained by French authorities last week and charged with corruption involving Russian doping cases.

The International Olympic Committee's ethics commission on Monday recommended that Diack be provisionally suspended as an honorary IOC member.

The IOC said it would carefully study Pound's report for any violations involving the Olympics.

"If any infringements on the anti-doping rules by athletes and or their entourage should be established, the IOC will react with its usual zero tolerance policy," it said.

Olympic leaders recently agreed that drug-testing should be taken out of the hands of sports federations and asked WADA to take over testing on a global level. WADA leaders will discuss the issue at a meeting next week in Colorado Springs, Colorado.

"The IOC will continue to take whatever measures needed to safeguard clean athletes, clean sport and good governance," the committee said.