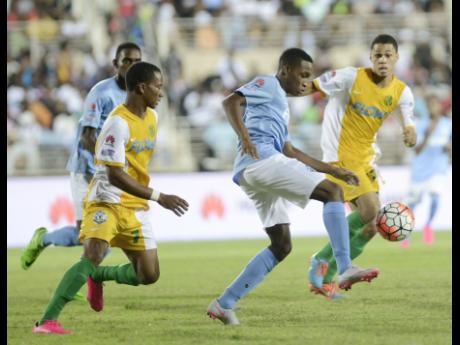 Laing admitted that the North Street-based school was better than his St Jago charges during their three defeats to them, which led to his conviction that STGC are the "favourites" for the title following a comprehensive 3-1 hammering in their Super Cup semi-final clash at Sabina Park last Saturday.

In the other semi-final, Jamaica College blanked Wolmer's 2-0 to set up a mouth-watering final on Saturday inside the National Stadium.

"We were up against a better team. Anytime you play St George's, goals gonna score.

We were hoping to get the communications at the back better, but didn't," Laing said. "They must be the favourites. They are scoring goals, and when you score goals, you will win games. I have them as the favourite right now."

Earlier this season, St Jago were beaten 3-2 in the Walker Cup, and dumped 3-0 in the Manning Cup at the hands of STGC.

In their last encounter, despite playing without captain and influential player Shevon Stewart, STGC showed their class in front of a packed venue.

In his absence, the familiar name of Alex Marshall stepped up to put the 'Light Blues' ahead inside the first minute, caressing home a Stephon Gilzene's cross from close range.

St Jago, however, did not capitulate after conceding that early goal, but built their attack from set pieces which the George's defence seemed incapable of handling effectively.

Shaqon Bryan tapped in a 24th minute equaliser as his teammates struck the crossbar twice with powerful headers from a teasing corner kick.

StGC again went in front when defender Akeem Prawl climbed above the St Jago defence and appeared to head the ball in the back of the net. Television replays, however, showed that the ball came off a defender's head and was chalked in as a 63rd minute own goal.

The Georgians certainly didn't care how the goals came and they were celebrating another soon afterwards after some enterprising play by another of their standouts, Gregory Messam Jr.

Messam Jr. who stood in as captain for the day, went by two players and played a marvellous ball to Marshall, who clinically swept past the advancing Akeem Chambers to extend STGC's lead and grab his second of the night in the 70th minute.