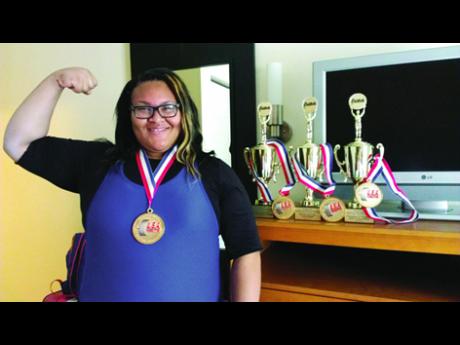 Contributed
LeeAnn Hewitt with her trophies and medals. 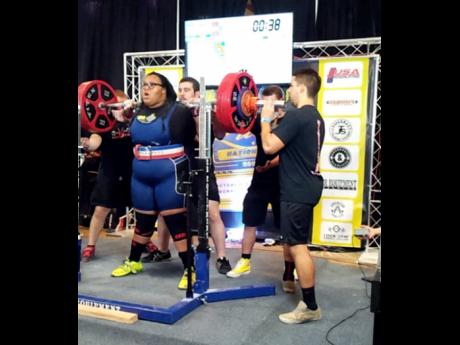 Contributed
LeeAnn Hewitt getting ready to do some squats.
1
2

LeeAnn Hewitt, a 16-year-old Jamaican-born athlete who goes to high school in the United States, has been creating a sensation in United States weightlifting and powerlifting circles recently, with a series of record-breaking performances at regional and national levels.

LeeAnn, who is the daughter of well-known graphic designer, Errol Hewitt and his schoolteacher wife, Pauline, became the youngest lifter to be selected to represent the United States in the 2016 World Championships in Texas next June, with a series of scintillating performances in various competitions recently.

A student at Wellington High School in Palm Beach, Florida, in six months she has shot to the top of her division in powerlifting by winning two gold and a silver medal in the recent USA 2015 National Raw Powerlifting Championships in Scranton, Pennsylvania.

However, her most outstanding performance came in the recent USA Powerlifting Raw National Championships in Pennsylvania, where she won gold medals in the sub-junior and High school divisions.

In three record-breaking performances - under the guidance of her powerlifting coach, Arian Khamesi - she lifted 529.1lb in the squat, bench pressed 236.9lb and dead lifted 468.5lb for a total of 1234.5lb.

This outstanding performance by the 16-year-old won her the silver medal in the Open division for women and qualified her for the USA team that will compete in the next World Powerlifting Championships in June, 2016.

She was beaten by defending world champion, 27-year-old Bonica Lough of Nebraska, who lifted 584lbs in the squat, 330 lbs. in the bench press and had a dead lift of 523lbs.