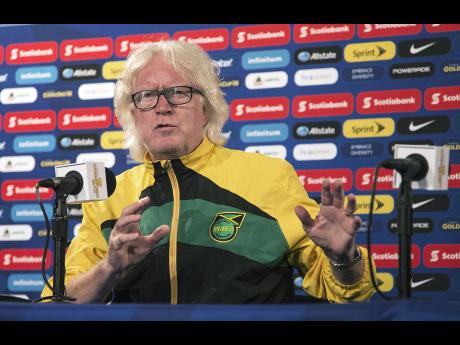 Head coach of the men's national senior team, Winfried Schafer, said he is well aware of Jamaica's dismal record against Central American opponents Panama, who they will face in the CONCACAF Semi-final Round World Cup Qualifying tomorrow at the National Stadium, beginning at 9 p.m.

However, he said the Reggae Boyz know what to expect and will be prepared.

"Panama is a very good team, they play very good football, have very strong players, so we have to go the limit in our performance, our fitness, our power, and continue to full the stadium, because if we don't full the stadium we have problem for the Boyz," he said.

"Before I came to the airport I watched a match (Panama) against Canada. They won very good with their system. So we cannot have any time free, we have to press, and it is very important to us for the lead," observed Schafer.

"After I leave the airport we will see who is ready ... but our players will be ready," he ensured.

Like other national coaches before him, Schafer is constantly under pressure to play locally bred talent playing in the country's top local leagues.

The German told The Gleaner that the best local players, those now plying their trade abroad, are already in the squad.

"I don't tell (people) that we have the best local players. But these local players go out (abroad) like Austin (Rodolph), Watson (Je-Vaughn), Alvas (Powell), Mattocks (Darren), Kemar Lawrence.

"These players go out and what is important, they have to work and become a new (better) player. So to work, that is it," he stated.

"The player is not the problem, but you have to work with the local players more and give better training and better fields," he said.