Victory at last for West Indies on Sri Lanka tour 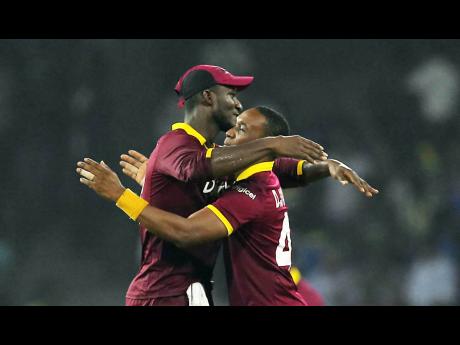 Seam bowlers Dwayne Bravo and Ravi Rampaul shared seven wickets to propel West Indies to a 23-run victory over Sri Lanka in their second Twenty20 international on Wednesday and draw the two-match series 1-1.

West Indies won the toss and elected to bat first, posting 162 for six in their 20 overs. Denesh Ramdin made 34 not out, while Johnson Charles was out for 34.

In reply, Sri Lanka was bowled out for 139 in the last ball of the match. Tillakaratne Dilshan made a second straight half-century and was out for 52.

Bravo returned career-best bowling figures with 4-28, surpassing his 4-38 against India six years ago. Rampaul had 3-20.

It was West Indies' only win on this tour, after losing every match in the Test and one-day international series.

Sri Lanka started their batting aggressively - at nearly 10 runs an over - until fast bowler Jerome Taylor removed Kusal Perera for 12, caught by Bravo with the score on 23.

The wicket was followed by the best partnership of the innings, with 70 runs off 60 balls between Dilshan and Shehan Jayasuriya.

It took a stunning effort by Andre Russell, who ran across to long-on to take a low catch by diving to his left, to break the partnership. It was Bravo's first wicket and it proved to be the turning point in the game.

Jayasuriya scored 30 off 32 balls, including a six and three boundaries, but Dinesh Chandimal was dismissed for one.

Dilshan, who looked in imperious form, played a well-timed switch-hit to deep square leg - only to find substitute fielder Jason Holder positioned there to take a high catch.

Dilshan made 52 off 38 deliveries, hitting five boundaries, having scored 56 in the first match in Pallekele on Monday.

Earlier, West Indies batsman Ramdin top-scored with an unbeaten 34 off 22 balls to lift his team's total after a midway slump. Charles also made 34, including three sixes and a boundary, while Bravo added 31.

Malinga returned two for 16 in four overs, while Siriwardana had two for 17 in three overs.

Denesh Ramdin not out 34

Darren Sammy not out 1 2

Dushmantha Chameera not out 3