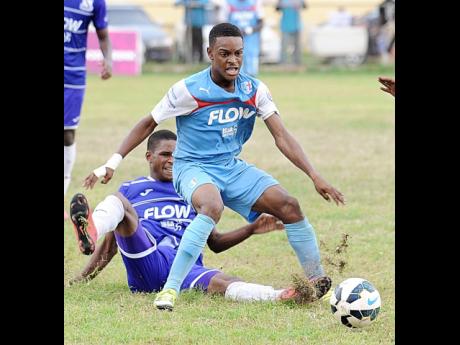 The Marshall was in town, and he wore 'light blue.' Alex Marshall, the leading goal-scorer in the ISSA/Flow Manning Cup, powered St George's College (STGC) to a cracking 2-0 win over neighbours and bitter rivals Kingston College at the Constant Spring field yesterday.

STGC, as a result, finished with a perfect three wins to qualify for the semi-finals from Group J, while St Jago beat Haile Selassie 3-1 at the Prison Oval in their final game.

The former national under-17 midfielder, now St George's centre-forward, has been heroic all season, striking a whopping 21 goals in all competitions to plant them in the Super Cup and the Walker Cup final and now the Manning Cup semis.

"St George's probably has the player or the deciding x-factor, and that was the end result in their favour. We were undone, of course, by a very good player in Alex Marshall, all credit to him. I thought that we did well to contain him for the remainder of the game," KC coach Ludlow Bernard reflected on yesterday's 2-0 loss.

Marshall told The Gleaner: "I wasn't at my 100 per cent best, but I still went out there and did the job. I wouldn't say they (St George's) rely on me, but they expect me to go out there, get the opportunities, and make use of them," he added.

Marshall's opening goal gave STGC the go-ahead inside minute 14, with the skillful, agile, and clinical finisher

creating space for himself before firing home from just outside the box, past captain/goalkeeper Akim Larmond.

His strike partner, Gregory Messam Jr, was dragged down by defender Jaziel Thompson inside the penalty box after getting on to a split-perfect through ball in the 78th minute.

Marshall obliged, coolly dispatching the resulting penalty kick low and hard to the right of Larmond to round out the 2-0 triumph.

KC had their chances with Javain Brown leaving Matthew Wilson and Paul Young for dead with his express pace before rolling an inviting pass across the face of the STGC goal, begging Jerome Lodge to tap it inside the net. The offer wasn't taken, and KC missed what was a great chance to pull level before half-time.

Throughout the game, KC's leading forward, Rashawn Mackison, had a good game, providing through passes and goal-scoring opportunities but was not supported.

Paul Young was given a straight red card in the 80th minute for violent conduct, while six yellow cards were issued in the historically-hot North Street derby.

"Thank God we are in the semi-finals! This is what we wanted. Kingston College pushed us. I dare say Kingston College and St George's is the greatest rivalry in schoolboy football, and we expected this from them," Neville 'Bertis' Bell said.