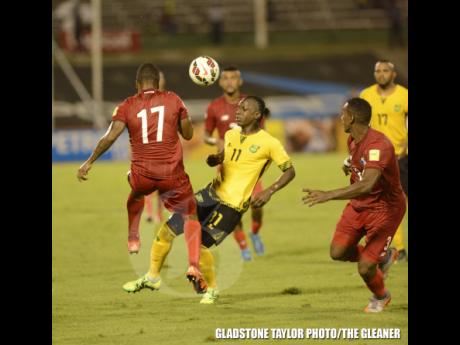 Jamaica’s Reggae Boyz made a poor start to their Semi-final campaign in CONCACAF World Cup Qualifying, losing 2-0 at home against Panama at the National Stadium.

Armando Cooper scored for Panama at the 42nd minute, then whipped in a cross that led to an own goal by Wes Morgan at the 52nd minute.

“This is football, you win some you lose some,” said Rodolph Austin, the Jamaica captain. “We can bounce back.”

Panama were the better attacking team and moved to three points in Group B of the round-robin phase, from which the top two will advance to the six-nation Hexagonal that ultimately decides the qualifiers for the 2018 World Cup Finals in Russia.

Costa Rica are also on three points to share leadership in the group, following their 1-0 win over Haiti.

Jamaica were not coordinated at all in the first half and had great difficulty going forward as their opponents marked and pressed the ball well, forcing a lot of turnovers.
As a consequence, forwards Darren Mattocks, and Giles Barnes especially, were starved of possession, with Barnes getting his only few touches at the back of the team close to half-time when he dropped deep alongside the central defenders.

In fact, for the entire first half, the Reggae Boyz were only able to get inside the Panama penalty box twice as they could not escape the suffocating defence.

The Panamanians, with number 11 midfielder Armando Cooper pulling the strings, found it far easier to maintain possession as they moved smartly and utilised their skill to out maneuver the Jamaicans, who need to be more patient to hold their shape.

Time and again, the Central Americans worked their way into the penalty area and looked likely to score, but Valentin Pimentel and Blas Perez could not hit the target with two shots apiece from either side of goal.

As they had been making the markings on the wall, Panama finally went ahead with Cooper’s well-taken free-kick from the left flank, a right-foter curled with the inside of his boot that looped over the hands of goalkeeper Duwayne Kerr’s misjudged attempt.

“This is the fourth straight set-piece goal that we’ve conceded against Panama,” said Miguel Coley, Jamaica’s assistant coach. “We need to correct that.”

On the stroke of the interval, they could have doubled their advantage, but Perez passed a sitter into the Jamaican goalie’s waiting arms.

For the crowd, it was a time for boos, a mark of their frustration for a non-productive effort.

The Reggae Boyz, however, never appeared thankful for the reprieve and with only seven minutes gone in the second half, they conceded a second goal.

Again, the provider was the most likely source, Cooper, who swung in a curling cross from the left flank.

Central defender Morgan, who lunged at the ball, got a boot to it, but inadvertently diverted it past his own keeper.

Miguel Coley, marshalling the troops from the sidelines in the absence of Winfried Schafer, who was serving a one-match FIFA ban for his verbal mingle with match officials in their previous game in Nicaragua, rung the changes with new recruit Clayton Donaldson, Alvas Powell and towards the end Dever Orgill the replacements for Mattocks, McLeary and Je-Vaughn Watson, respectively.

Fresh legs brought energy and improvements, with Jamaica becoming more of a threat.

Joel (Jobi) McAnuff had a shot charged down that skimmed just wide of goal, the ball dropped on Donaldson’s foot near goal mouth and the lively Orgill almost scored with a header, forcing a brilliant save off goalie Jose Calderon.

With Jamaica unable to penetrate the Panama defence in the four additional minutes, the crowd trickled out with head hung low.

The sound selector tried to lift the vibe, letting loose Bob Marley’s ‘Don’t you worry about a thing, because every little thing is gonna be alright”.

Without a point and losing at home in the opening group encounter, the thought may have been comforting, but not the result.

The Jamaicans will now look to turn around their fortunes in Port-au-Prince, where they will battle Haiti in their next game on Wednesday.