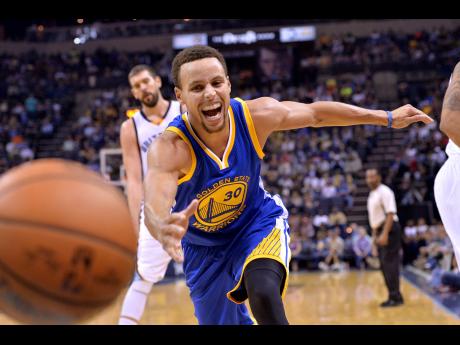 AP
Golden State Warriors guard Stephen Curry (30) chases the ball after knocking it loose from Memphis Grizzlies guard Courtney Lee in the second half of an NBA basketball game on Wednesday. The Warriors won the game 100-84.

Stephen Curry scored 28 points and Andre Iguodala added 20 as the Golden State Warriors matched a club record for most wins to start a season with a 100-84 victory over the Memphis Grizzlies on Wednesday.

Harrison Barnes added 19 points for Golden State, which won their ninth straight to open the season. Curry's was 9 of 21 from the field but only 3 of 10 from outside the arc. The Warriors finished shooting 41 per cent from 3-point range, 11 of 27.

Marc Gasol had 26 points, Zach Randolph added 19, and Tony Allen finished with 15 as the Grizzlies lost their fourth straight.

San Antonio's LaMarcus Aldridge scored 23 points in his return to Portland, leading the Spurs to a 113-101 win over the Trail Blazers.

Aldridge, who played nine seasons in Portland before leaving as a free agent this summer, added six rebounds. Kawhi Leonard finished with 20 points for the Spurs, who won their third straight.

In Dallas, Dirk Nowitzki scored a season-high 31 points to lead the Mavericks over the Los Angeles Clippers 118-108 in DeAndre Jordan's first visit since backing out on an agreement to sign with the Mavericks in free agency.

A tight second half upstaged the sideshow of the return of Jordan, who was booed throughout before coach Doc Rivers pulled him in the fourth quarter with Dallas successfully using the hack-a-Jordan tactic against one of the NBA's worst free throw shooters.

As Dallas pulled away in the final minute, the crowd chanted a derogatory phrase at Jordan, who had nine points and 11 rebounds with a minus-23 scoring margin while he was in the game.

After trailing by 12 points in the first half, the Hawks pulled away down the stretch. Paul Millsap converted a couple of three-point plays to help seal the victory for Atlanta, which bounced back from a home loss to Minnesota two nights earlier.

Denver's Kenneth Faried rebounded Danilo Gallinari's errant shot in the lane for a putback with five seconds remaining to give the Nuggets a 103-102 victory over the Milwaukee Bucks, while the Toronto Raptors defeated the Philadelphia 76ers after Kyle Lowry scored 23 points and Luis Scola had 21.

In other games, Nik Vucevic hit a fallaway 18-footer at the buzzer as the Orlando Magic edged the Los Angeles Lakers 101-99, the Charlotte Hornets edged the New York Knicks 95-93, the Indiana Pacers beat the Boston Celtics 102-91, the Brooklyn Nets overcame the Houston Rockets 106-98, and the Los Angeles Kings were 101-92 winners over the Detroit Pistons.

Warriors too strong for Mavericks