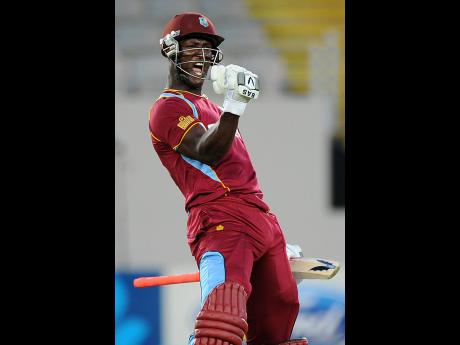 Captain Darren Sammy says West Indies were always confident they could defend 162 at the R. Premadasa Stadium, especially drawing on the experience from the final of the Twenty20 World Cup staged at the venue three years ago.

The Caribbean side beat Sri Lanka for the first time on the current tour on Wednesday when they pulled off a 23-run victory in the second and final Twenty20 International here.

Sammy said the Windies were cognisant of the fact that they beat Sri Lanka here in the T20 World Cup final defending an even smaller total.

"When we played the finals here, we scored 130-something and defended it, so that was a reminder for the guys going on to the field in the second half of the game."

He added: "Like I said, we had a good start [and] we controlled the power-play. They didn't get off to a flyer.

"They didn't get used to one particular bowler. If you notice, the plan was to give one-over spells for the bowlers, and it worked, and we kept on taking wickets every time they looked like getting a partnership. So that was the key for us."

The victory for West Indies gave them a share of the series after they lost the opening T20 in Kandy by 30 runs on Monday.

More important, it was their first win over Sri Lanka on tour and would have served as a boost for flagging morale, especially after having lost every game in the Test and one-day series.

"It was good to end the series on a winning note. I think you could see the difference today after playing the first game, which we still thought we could have won, but we were coming from a long break from international cricket, but it shows how quickly we could learn and you could see it was a much more professional effort," Sammy said.

Charles and Fletcher put on 62 for the first wicket, and following a middle order slump, Ramdin struck an unbeaten 34 in a 41-run, fifth-wicket stand with Bravo, who stroked a run-a-ball 31.

West Indies failed to find acceleration at the death and finished on 162 for six off their 20 overs, but Sammy said Sri Lanka's seamers had to be commended for their excellent bowling later on.

"They bowled really, really well at the end of the innings, but the work done by Charles and Fletcher at the top gave us that cushion, even if they bowled some good overs.

"The key was to bat around Bravo, and I thought he and Ramdin stepped up the pace a little bit, and at the end of the day, 160 was enough to get the job done."