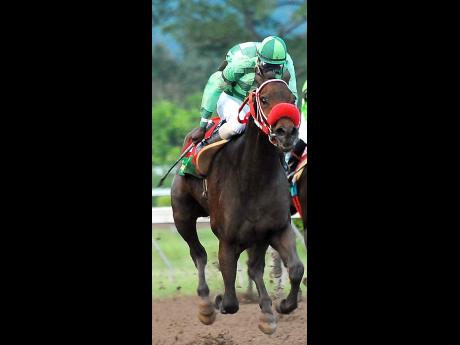 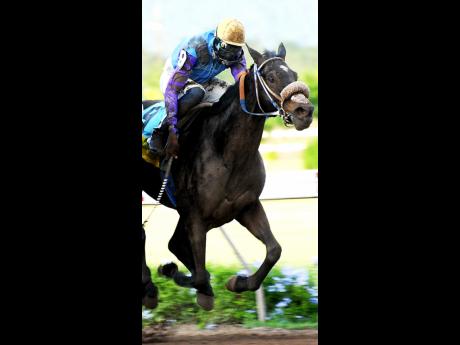 The 37th running of the Burger King Superstakes over 2000 metres is the big event at Caymanas Park today, the nine-horse field including two-time winner TYPEWRITER and his arch rival PERFECT NEIGHBOUR, the two best distance horses in the country.

While the $4.5 million Superstakes is the showpiece event of the afternoon, the mammoth 13-race programme will facilitate three other valuable sponsored races. These are the 27th running of the Glen Mills O.J. Caribbean Sprint Championship - in honour of world-renown track and field sprint coach Glen Mills, himself a long-time racing enthusiast; the Coca Cola Invitational Mile, with a purse of $1.25 million; and the Coca Cola 2-y-o Juvenile Sprint over 1300 metres for a purse of $1 million.

TYPEWRITER, to again be ridden by big-race jockey Shane Ellis for trainer Spencer Chung and the Wayne DaCosta-trained PERFECT NEIGHBOUR under stable jockey Robert Halledeen, both represent class. And while others such as last year's runner-up UNCLE TAF; FRANFIELD, who was fourth a year ago; and the DaCosta-trained HOVER CRAFT should prove competitive, I see it coming down to the big two.

the race is definitely on

Significantly, the three-year-olds, in an unprecedented move, have bypassed the Superstakes, including derby winner SEEKING MY DREAM and stable-companion ALI BABA, who will instead run in the Invitational Mile. As a result, the race has lost some of its sheen, owing to the absence of the three-year-olds.

Still, TYPEWRITER and PERFECT NEIGHBOUR should ensure the necessary fireworks to excite racing fans. When both horses last met over the distance in the Governor General's Stakes on September 26, PERFECT NEIGHBOUR led home TYPEWRITER by 4 3/4 lengths in the fairly good time of 2:06.4, but he was in receipt of 4.0kg that day and now asked to sit level with TYPEWRITER (working very well), the race is definitely on.

The fact that Wayne DaCosta has never won the Superstakes also puts a different spin on the race. PERFRECT NEIGHTBOUR was highly fancied to win a year ago but could only manage third.

This remains the only major race that has eluded DaCosta in a long and distinguished training career, but he has the horse to finally break the jinx in PERFECT NEIGHBOUR, who ran on strongly to win the Alex's Imports Gold Cup race over 1400 metres on October 17.

"He has done everything asked of him coming into this race, and given luck in running, is in the best condition of his career to win this prestigious race," he added.

Over the years, DaCosta has seen some of his best horses fall along the wayside in the Superstakes. The most celebrated was the 1996 Triple Crown winner, WAR ZONE, who, on the back of a record 12 consecutive wins, was thwarted by a muddy track, finishing third as the howling favourite to the Trinidadian horse ADORING GROOM and the celebrated claimer PRINCE AKEEM.

Today, I expect the stretch-running PERFECT NEIGHBOUR to succeed where WAR ZONE failed by outfinishing his principal danger, TYPEWRITER, from below the distance.

Other firm fancies on the programme are the impressive 3-y-o colt POKER STAR to upstage hat-trick seeker CAMPESINO in the Glen Mills Caribbean Sprint; Derby winner SEEKING MY DREAM (working brilliantly) over stable-companion ALI BABA and TIMEFORARMS in the Coca Cola Invitational Mile; the unbeaten ZUGULU in the Coca Cola 2-y-o Juvenile Sprint; as well as LONG RUNNING TRAIN in the fifth for overnight allowance horses.