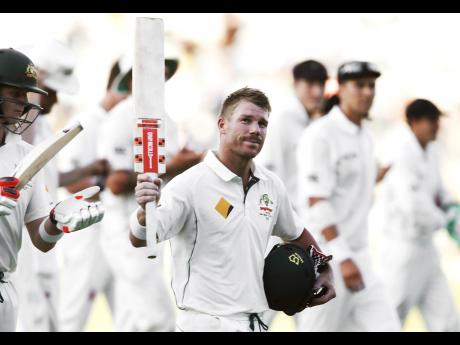 New Zealand were fighting to stay in the second Test against Australia as they chased a mammoth 559-9 declared on the second day at the WACA.

New Zealand was 140-2 at stumps yesterday, trailing the hosts by 419 runs and still 220 runs short of making Australia bat again and avoid the follow-on. Kane Williamson was unbeaten on 70 and Ross Taylor on 26 after coming together at 87 for two.

A career-best 253 by Dave Warner has all but shut New Zealand out of the Test match and gave Australia a stranglehold to force a win and take the series 2-0. Australia won the first Test in Brisbane by 208 runs.

"I achieved what I set out to do, that's scoring a double hundred," Warner said. "That's great. At the end of the day, it's putting the team first ... it's put us in a great position."

Despite the team's strong position, Warner said Australia could struggle to force a win on a flat batting pitch that has failed to live up to being fast and bouncy.

"It's quite slow for a WACA wicket. The balls are getting soft. A hint of reverse (swing) might come into play," he said. "At the end of the day, we have to take 18 wickets ... it's probably one of those games that will go the five days and come to the last hour."

The New Zealand reply got off to an inauspicious start when opener Martin Guptill was trapped leg before wicket by left-arm swing bowler Mitchell Starc with just six runs on the board.

Then, opener Tom Latham (36) and Williamson battled Australia's pace attack over two hours in an 81-run second-wicket stand, before off-spinner Nathan Lyon ended the partnership when the Latham edged a low catch to skipper Steve Smith at slip.

Williamson continued from where he left off, with 140 and 59 in the first Test in Brisbane, with a plucky half century, bringing it up with his seventh four, an exquisite cover drive off left-arm swing bowler Mitchell Johnson. He has so far batted for 187 minutes, hitting 10 fours in all off 121 balls.

The tourists could have been in trouble had short-leg fielder Joe Burns taken two sharp chances offered by Williamson. One of the chances hit Burns on the peak of the helmet and required attention from the team's medical staff.

Earlier, Usman Khawaja, who scored 121 in his 302-run second-wicket stand with Warner on the first day, left the field with a strained hamstring while chasing a ball on the outfield. The team confirmed Khawaja will have scans on the troubled leg today, and given his history of hamstring issues, it is unlikely he will be fit for the third Test, the first with a pink ball and under lights, starting in Adelaide on November 27.