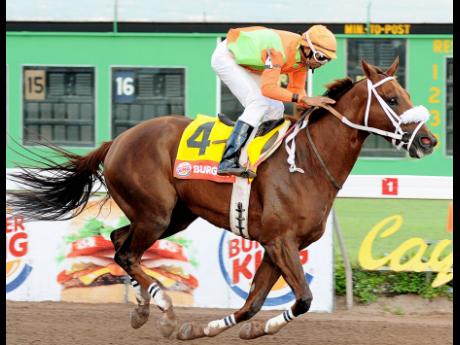 FRANFIELD, running at odds of 7-1 with leading all-time jockey Winston Griffiths riding for big-race trainer Richard Azan, won the 37th running of the Burger King Superstakes - an eventful race which left the large crowd in a tizzy - over 2000 metres at Caymanas Park yesterday.

After passing the post five lengths clear of 18-1 outsider HOVER CRAFT in the $4.5 million race for three-year-olds and up, FRANFIELD had to survive a lengthy stewards' enquiry, as well as objection from jockey Robert Halledeen, who rode third past the post PERFECT NEIGHBOUR (4-5) in the nine-horse field.

It was the 7-1 chance, UNCLE TAF, who led for most of the way under former champion jockey Wesley Henry, but he was chased relentlessly by FRANFIELD, followed by PERFECT NEIGHBOUR on the rails and the 3-5 marginal favourite, TYPEWRITER, seeking his third consecutive Superstakes win, with customary rider Shane Ellis aboard.

What looked to be developing into an interesting race at the halfway stage took a dramatic turn from the half mile when Griffiths pushed his mount past the early leader, UNCLE TAF, who hauled up sharply at this stage, interfering with the Wayne Dacosta trained PERFECT NEIGHBOUR, who lost valuable ground.

Thereafter, it was all FRANFIELD, as the four-year-old chestnut colt by Traditional out of Supa Lei kept on strongly to win by five and a half lengths from the late-closing HOVER CRAFT (18-1) from the Dacosta Stable.

For Azan and 57-year-old Hall of Famer Griffiths, it was a day with the "kings and his horses", as the race was billed. Azan saddled an unprecedented ninth Superstakes winner, including four straight by MENUDO from 1999 to 2002, while Griffiths was notching his eighth.

Azan, who also posted his unbeaten colt, ZUGULU, to win the $1 million two-year-old Juvenile Stakes with Ellis aboard, said: "Franfield is a better horse this year, and I was encouraged by his previous run with a fast-finishing second to Campesino over six furlongs on October 24.

"I took him to task in preparation for the Superstakes, and given the easier pace, I am happy that he has delivered, and he will be back for the $13.5 million Diamond Mile on December 5."

On a day when star apprentice Linton Steadman rode three winners, POKER STAR (8-5) romped the Glen Mills Caribbean Sprint, while PHINEAS (3-1) got up on the line to pip derby winner SEEKING MY DREAM in the Coca Cola Invitational Mile.