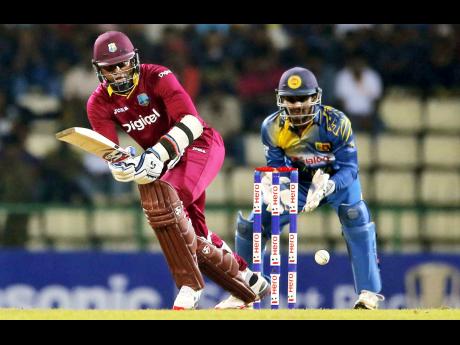 West Indies cricket is passing through some hard times. For the past 25 years or so, West Indies cricket has been hit by all sorts of problems, what with a senior player walking out of his hotel during a tour, another player sent home during a tour, players refusing to tour, the president of the board forced to fly to London to save a tour, players going on strike for more money, quarrels over the captaincy of the team, players giving up the captaincy, and one captain after another leaving as they do in a game of musical chairs.

In 1995, the West Indies lost the crown as champions of the world, and this has been followed by defeat after defeat until it has reached a stage where they will not, or cannot, compete in next year's Champions Trophy tournament simply because they are no longer ranked among the top-eight teams in the world.

To top it all, the West Indies regional tournament is no longer ranked with the best in the world.

With the best players occupied elsewhere, with Trinidad and Tobago, for example, playing almost a second-eleven team, regional cricket is now little better than club cricket, with many matches, planned for four days, finishing in two days.

The Board cannot and should not be blamed for all of this. Despite doing a few things, such as the playing of return matches and paying players to play the game, they are guilty, however, of many things, including the collapse of West Indies cricket.

The Board may decide to fight CARICOM instead of going quietly, and one of the changes the Interim Board needs to put in place for the future is the way by which the president is elected.

It seems unreasonable, for example, that in a region of so many people, of six sovereign nations and in a region where democracy is supposed to rule, that it takes only 12 people - as representative of the affiliates - to vote for the president of such an important organisation.

All that is necessary for anyone to win the vote is seven of those 12 votes. Something must be done about that.

The problem, the real problem with West Indies cricket, is the modern-day attitude of the West Indian people.

In days of old, West Indians were a proud people; they were poor, but they were proud. The fathers and mothers worked hard, and the children, the boys especially, dressed as nicely as they could. They studied hard, and they dreamed of doing things, of representing people, especially at sports and at cricket. And unless you were a star, you were expected, like the non-playing members, to pay your club dues.

The men in charge in those days, the club presidents and club secretaries, were also respected members of the club.

Today, however, that is not so, not generally so.

Today, everybody is a big shot. Rich or poor, everyone, or almost everyone, goes to work, for example, at his own leisure and in his own time. There is hardly any pride in dress, especially among boys. All their time, for most of them, is spent going to parties and to night clubs doing nothing progressive. There is hardly any pride in doing anything, except may be, schoolboy sports.

On top of it all, the players pay not a cent for their own development and enjoyment. The clubs which encourage it are broke, and there is hardly any respect for anyone, including the doctor, the preacher, the lawyer, and the teacher, much less the club president or the club secretary.

Whereas once upon a time, the president of the club or club secretary was a big boy in the society and, more or less, highly respected, someone who could, for example, get a job for anyone, today, the president or secretary is a just another member and treated as such by the member whose skill sees him earning more than the president or the secretary.

Thanks to those who went before, all that has changed, and thank God for that. It is, however, part of the changing times and part of what has happened to West Indies cricket.

These are some of the things which have affected the West Indian society and West Indies cricket. Some things, some changes, have been great, but some things have been bad.

The will to train and to practice is missing, the willingness to follow instructions is absent, and the pride of performance is sadly lacking. All that is left is the urge to go where the money is, something that is allowed by a weak board, and one which has failed to control the players, to make them understand commitment and loyalty.

Although they are contracted to West Indies cricket, or to their territory's cricket, the West Indies players are the only players who turn up almost everywhere to play in other countries' domestic cricket, and at the expense of their own cricket.

The West Indies is also a relatively poor region, and because of all these things, cricket may never change, except the players somehow change their attitude and train and practise, or unless the gods smile on the Caribbean and the region suddenly becomes rich, rich enough to spend some more money on sport, particularly on cricket, without sacrificing the necessities of life, necessities such as health care, food, housing, education, and safety.