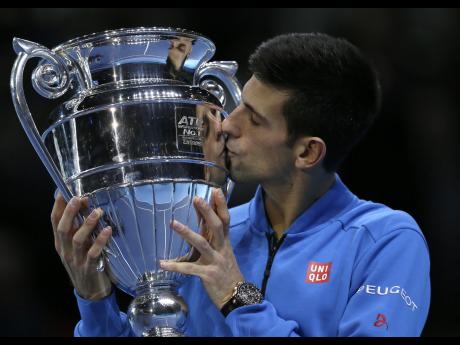 Right now, Novak Djokovic is about as good as it gets on a tennis court.

The top-ranked Serb put on an impressive display against Kei Nishikori at the ATP finals yesterday, stretching his winning streak to 15 matches at the season-ending tournament with a 6-1, 6-1 win at the O2 Arena.

"I think I was at my best," said Djokovic, who has won the last three titles at the ATP finals, and four overall. "Undoubtedly, it's been an incredible performance that I was hoping I can have coming into the match, coming into this tournament."

Djokovic lost only nine points on his serve and never faced a break point. With Nishikori serving, Djokovic won 30 of the 53 points played.

Before the match, the ATP held a minute's silence for the victims of the Paris attacks. The Islamic State group claimed responsibility for Friday's attacks on the Stade de France, a concert hall and Paris cafÈs that left 129 people dead and more than 350 wounded, 99 of them seriously.

Federer, a six-time champion who is playing at the season-ending tournament for the 14th straight year, got off to a slow start, winning only one of the first nine points to fall behind 2-0. But he quickly turned things around and ended up with a pair of breaks in each set and another win in London.

Djokovic has not lost at the season-ending tournament at the O2 Arena since 2011, when Janko Tipsarevic beat him in the round-robin stage. Besides his run at the ATP finals, Djokovic has won 38 straight matches indoors, a streak stretching back to 2012.

Nishikori, making his second appearance at the tournament for the top-eight players in the world, found out just how good Djokovic is right now.

"I think my serve was the key. Both sets, I lost my first-service game," said Nishikori, who beat Djokovic in the 2014 US Open semi-finals. "I mean, he also played unbelievable tennis. Very ashamed with this score."

Maybe he shouldn't be, though.

Djokovic is having the best season of his career. He reached the final at all four Grand Slam tournaments, winning three of them. His only loss in a major this year came in the French Open final, when Stan Wawrinka beat him in four sets.

And another title in London next Sunday will make Djokovic the first player to win four straight at the season-ending tournament.