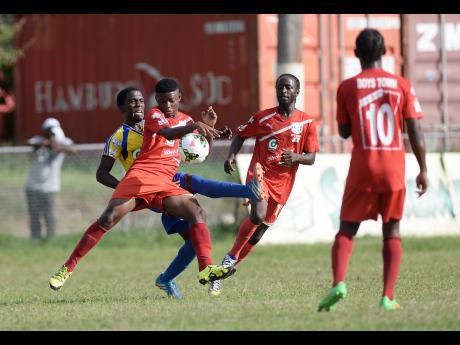 The win ended the St James club's ten-match unbeaten run and put Portmore on the same number of points (24) with them at the top of the Red Stripe Premier League (RSPL) standings. Portmore, however, trail on goal difference.

Meanwhile, at Barbican Complex, Claudius Blackburn and Jorginho James' quick response to Rafiek Thomas' first-minute strike saw Harbour View register a come from behind 2-1 win over Boys' Town to start the second round of the competition on a winning note.

Blackburn pulled one back after nine minutes and James' 14th minute goal put them ahead.

The win moved them two spots up to fifth, while leapfrogging yesterday's opponents by one place and two points.

Harbour View have four wins, three defeats and five draws in their 12 matches, and coach Ludlow Bernard noted that consistency was their main downfall in the first round and that they are working to fix the problem for this round.

"We need to be consistent in players' performance, as well as team play. We are doing our utmost best to manage games, because we are playing some very good teams. But we are working to ensure it happens," he stressed.

Even though they went behind very early, Bernard praised his players for their composure and decisiveness.

"It was innocuous to go behind so quickly, but the players held their nerve and were very decisive in getting the equaliser as quickly as possible," he added.

In the first minutes, Boys' Town were handed a penalty and Thomas made no mistake as they hunted their fourth win in five games.

However, their lead lasted only eight minutes, as John-Ross Edwards left his marker and centred for Blackburn, who guided home from close range.

Five minutes later they were in the lead after James turned his marker and struck a fierce shot from outside the area past Kirk Porter.

Boys' Town were better after the break and their best chance for another goal came midway the period when a loose ball fell to Michael Blygen, but he scooped over from six yards.

They had another great chance later on when Daemeon Benjamin played in Thomas, but he hesitated and allowed Devon Haughton to snatch the ball from his feet.

Boys' Town coach, Andrew Price, said they lost their composure and discipline after 15 minutes and paid for it.

"The players allowed the referee to get into their heads and they started arguing with him. You have to have some concentration and some discipline, but it fell apart, and it was hard for us to get back into the game," he stated.