Russia can only return if compliant - Bach 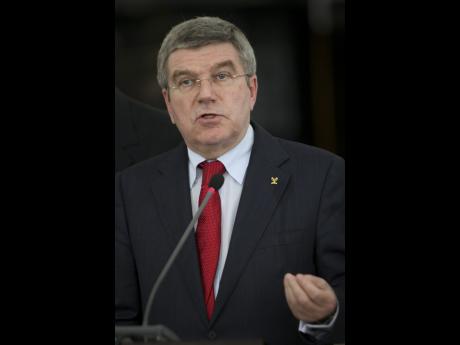 Russia's track and field athletes will be eligible for the Olympics only if the country falls in line with all global anti-doping rules and the reforms are verifiable, IOC President Thomas Bach said yesterday in an interview with The Associated Press.

"The important goal is not bringing them back," Bach said. "The goal has to be Russia being compliant again with all the international anti-doping regulations. That is the important thing, so that we have an even playing field for all the athletes."

Russia's athletics federation was provisionally suspended by the IAAF on Friday, just days after the country was accused of operating an extensive state-backed doping programme in a report by a World Anti-Doping Agency (WADA) independent panel.

The sanction means that Russia's track and field athletes - including pole vault star and two-time Olympic champion Yelena Isinbayeva - are banned indefinitely from all international competition, a punishment that could cover the 2016 Games in Rio de Janeiro.

Bach said the Russians will need to move swiftly to deliver on reforms that would clear them in time to qualify to compete in the Rio Games, which open on August 5.

"The situation is compliance," he said by telephone from Lausanne, Switzerland. "If the Russian athletics federation is not compliant and the athletes cannot take part in any kind of qualifications, then the situation is clear. If you cannot qualify, you cannot participate in the Games."

Bach and the head of the Russian Olympic Committee, Alexander Zhukov, reached an agreement on a road map for Russia to follow to become compliant with rules of the IAAF and WADA. No time frame was set.

"Russia must be very interested to have this done as soon as possible," Bach said. "They have to act swiftly because this concerns the credibility of all the efforts."

Zhukov promised to oversee an overhaul of Russia's athletics federation, anti-doping agency and national drug-testing lab, all of which were implicated in the damning report issued recently by the WADA panel.

"This is, first of all, to make sure that all the implicated officials, coaches, doctors and so on, will be held responsible and sanctioned," Bach said. "Second, there will be a complete renewal and reform of the national athletics federation, and third, that all the doped athletes will be punished and the clean athletes will be protected."

In addition, Russia's anti-doping lab, which has been stripped of its accreditation by WADA - and the anti-doping agency, declared non-compliant by a WADA committee - must become compliant again.

Bach said it will fall to the IAAF and WADA to rule whether the Russians are compliant. Only then would Olympic entries be accepted by the IOC.

Russia's athletics federation said yesterday it is setting up committees to investigate the doping allegations and prepare a reform package as part of what acting federation president Vadim Zelichenok called an "anti-crisis plan".