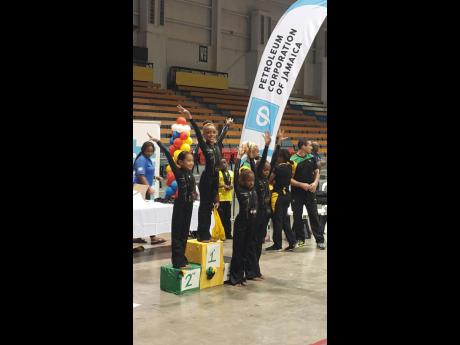 "We expected the team to do well but they have done exceptionally well," Grant-Brown told The Gleaner. "They worked very hard and performed way above their ability."

The young representatives topped the regional competition on the weekend at the National Indoor Sports Centre as they amassed 258 points to finish ahead of the Cayman Islands, 228, and Trinidad and Tobago, 219.

Lewis, a senior male, was the tournament's top scorer with a score of 74.600. He had first-place finishes in Level Ten on the floor, vault and parallel bars. Williams was second with victory on the rings and pommel horse.

Brown, performing at Level Eight, was the nation's second top scorer with 62.950. He was perfect in winning all six disciplines (floor, pommel, rings, vault, parallel bars and high bars).

The tournament's third top scorer, Smalling, tallied 58.300 points after winning the Level Four men's pommel and high bars, while placing second in floor exercise, vault and parallel bars, and third on the rings.

Shirley was also first in Level Two female events, taking the vault and floor exercise to top the group with 37.250 points.

Kimoya Banks followed her closely with 37.000, although she had just one win, on the floor. Jamilla Duffs was the next best scorer with 34.250, although her only win also came on the floor.

Cole scored 9.500 after she claimed firsts on the vault, bar and floor exercise for Level Three junior women.

The tournament was basically a juniors championship, as

the organisers thought that Jamaica's senior team was too advanced for the other countries, which would have given them an unfair advantage. As a result, the junior scores were used to determine the placing of the teams.

"We are really trying to focus a lot on the juniors to get them competing a lot more, as the seniors have a lot more competition and the juniors don't have those things," explained Grant-Brown.

"We are preparing our athletes for championships, because come next year when we have the Pan Am, the CAC championships and Commonwealth Games we will be included in these tournaments, so we can be in a position where we are included because we were not included last time (year) and we want to make sure we are competing in as many things as we possibly can," she added.