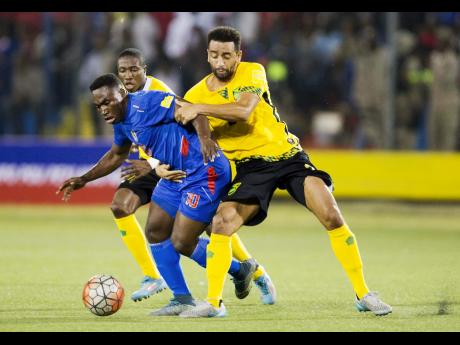 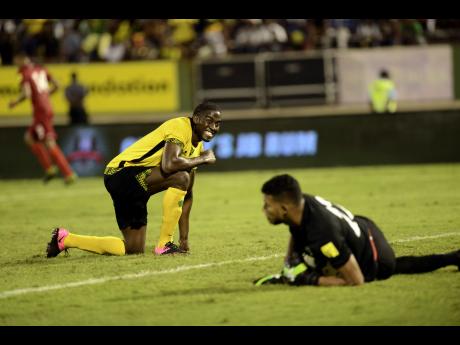 Jamaica's Clayton Donaldson (left) smiles ruefully as a half-chance passes him by and Panama's goalkeeper Jose Calderon clutches the ball during the CONCACAF Semi-final round Group B World Cup Qualifying football match at the National Stadium on Friday November 13, 2015. Panama won 2-0. 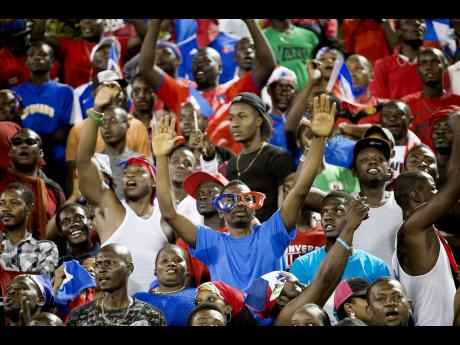 AP
Haiti's supporters dance before the start of the second half of a 2018 World Cup Qualifying soccer match against Jamaica, in Port-au-Prince, Haiti, Tuesday November 17.
1
2
3

A 63rd-minute header by new Reggae Boyz recruit Clayton Donaldson powered Jamaica to a crucial 1-0 victory over Haiti in their second match of the CONCACAF semi-final round World Cup Qualifiers at the Stade Sylvio Cator in Port-au-Prince, Haiti, yesterday evening.

The result catapulted Jamaica back into contention of the four-nation Group Two, and they are now three points from two games, following Friday night's disappointing 0-2 home loss against Panama at the National Stadium in Kingston.

Haiti were suffering their second loss in as many matches and stayed bottom of the group without a point, after losing their opening fixture 0-1 in Costa Rica last Friday.

The Reggae Boyz played without regular captain Rodolph Austin, who sat out the match with starting striker, Giles Barnes, because it was being played on an artificial surface and they had concerns about injury.

Another team regular, Simon Dawkins, who scored the last-minute goal against Nicaragua in the previous round to save Jamaica from elimination, did not play in Friday's loss and left the squad ahead of yesterday's match.

Jamaica's head coach Winfried Sch‰fer returned to the team bench after serving a one-match FIFA ban, owing to a verbal spat with match officials after their return-leg 2-0 win over Nicaragua in Managua in the first round. That result gave Jamaica a 4-3 aggregate win, as they had lost the corresponding home fixture 3-2 at the National Stadium and needed to win by at least two clear goals.

Following Friday's loss, the Boyz again needed to get back in the hunt immediately, and Donaldson showed battling qualities to recover from a first-half injury sustained in a clash with the Haiti goalkeeper as he challenged for the ball. The striker had to seek treatment off the field and returned to action under the urging of his coach and teammates. Ultimately, it paid off with a match-winning goal.

Michael Hector played away from his regular central defence position in the second half and had great presence at central midfield as he broke up a number of attacks for the Jamaicans, who maintained their dominance over Haiti, winning five of their last six encounters, including a similar 1-0 result in the Gold Cup quarter-finals in summer.

Jamaica will play next in WCQs at the National Stadium on March 24, 2016 against Costa Rica.

Central American teams Panama and Costa Rica battled in a late kick-off last night. Both teams went into the contest with three points, owing to their first-match wins.

Competition in this phase of qualifying for the 2018 World Cup Finals in Russia is on a home and away basis, with all four teams slated to play six matches in total.

The top two, along with the top two from groups A and C, will advance to the six-nation CONCACAF Finals, the Hexagonal.