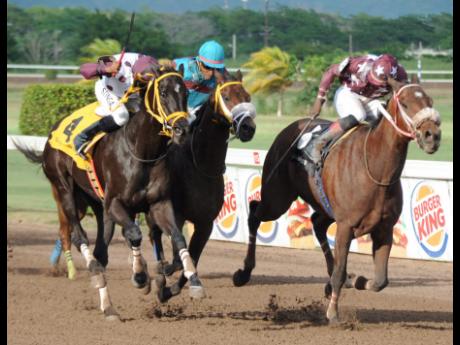 Ian Allen
DOC HOLIDAY (right), with Lawrence Steadman aboard, gets up in the nick of time to beat FLYING MIRACLE, ridden by Andre Martin (centre) and MERU (Jevanne Erwin) in the I Love My Whoper Trophy for 3-y-o & Up $350,000 claimers, on Burger King Superstakes Day at Caymanas Park last Saturday.

With nine fit horses declared, the leading lights are RAJA SARANGI, DANOS LA PAZ, GEISHA'S GLORY, SIR SOUTH and recent winner XQUISITE CHOICE, who has settled down to her racing of late.

Although struggling to find his best form in recent weeks, DANOS LA PAZ is apparently fitter for this race and could topple rivals over what is an ideal trip.

Trained by Neville Peralto for New Blue Limited, the four-year-old colt by War Marshall out of Lady Rakwalaay was missing from competition during the summer. And when he returned on October 19, was soundly beaten by SPARKLING MICHAELA over a mile, a race in which RAJA SARANGI closed fast into second place, just ahead of GEISHA'S GLORY in third.

Having had two more races since, DANOS LA PAZ, with title-chasing jockey Robert Halledeen aboard, should be cherry ripe for this race.

Although winning only once from 11 starts this season, the bay colt by Adore The Gold out of Ecstatic has run some good races in defeat, despite a tendency to be slowly away at the start.

Having been kept on the move at exercise and looking well, RAJA SARANGI will not go down easily, providing he does not give it away at the start. His final rattle should prove too strong for GEISHA'S GLORY, under useful 4.0kg claiming apprentice Odean Edwards, DANOS LA PAZ and XQUISITE CHOICE. That's the superfecta.