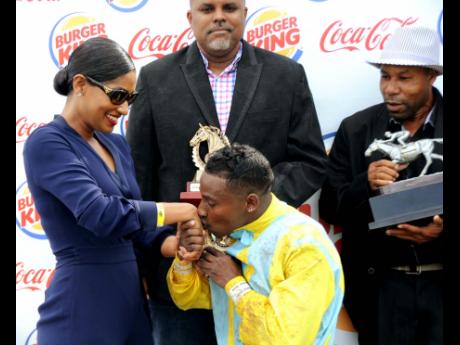 The stewards struck in the dark at Caymanas Park yesterday disqualifying last-race winner PRINCESS SHEMIKA after a very lengthy enquiry.

Installed a 4-5 favourite with apprentice Odean Edwards aboard, PRINCESWS SHEKIKA came through on the rails early in the last furlong to beat 12-1 chance DUTCHROW and GENUINE FRIIEND (9-2) in the restricted allowance race over 1200 metres.

With the light fading fast, the stewards conducted an enquiry into the running of the race and, following lengthy deliberations, disqualified PRINCESS SHEMIKA for having caused interference to GREAT BROWN (18-1) on the rails at the halfway stage.

The race was awarded to DUTCHROW, who chased long-time leader JUSTLIKE EMMA (9-1) into the straight and held on well for second, with GENUINE FRIEND promoted to third.

Indeed, it was a day when the stewards were kept busy in most of the races on the programme of nine.

In the first race, apprentice Oneil Beckford (substituting for outgoing champion jockey Dane Nelson) was thrown by his mount, EAST SIDEGIRL, leaving the half mile and while the worst was feared, the young rider was given a green light by the doctor on duty to ride for the remainder of the day.

As a result of this incident, the stewards disqualified the sixth horse, HE'S A DIAMOND, out of the race for causing the mishap.

In the eighth race, won by 6-5 favourite ANGEL STAR, the stewards summoned jockey Shamaree Muir, who rode the runner-up LAZZA, this for hitting apprentice Javiel Patterson aboard the third horse, HAIL THE CAT, in his face with the whip (twice) a furlong out.

There was a verbal spat between both jockeys in the tunnel en route to the Jockeys' Room.

Meanwhile, in the absence of the 4-5 favourite RAJJA SARANGI, turned back at the start on the advice of the vet, DANOS LA PAZ (3-1) seized the opportunity to win the feature race over 1500 metres in a driving finish from the late-closing SIR SOUTH. He was ridden by Robert Halledeen for trainer Neville Peralto.