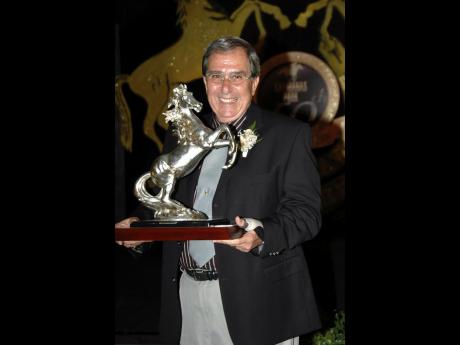 Nunes' leading patron, Haloute, is considered the pioneer of the overseas-based owner who began purchasing horses from the yearling sale in 1992 to take back to the Eastern Caribbean.

But many of his purchases stayed In Jamaica with trainer 'Baba' Nunes, some such as TERREMOTO winning both the Jamaica and Trinidad derbies in 1998, as well as the Superstakes at Caymanas Park that year before his untimely death months later.

Other big race winners for Haloute in Jamaica include PITTACUS and AD INFINITUM in the 2003 and 2008 Superstakes, respectively, as well as the outsider TECHNOMOTO in the 2011 derby and RELAMPAGO in both the derby and St Leger in 2014.

Significantly, Haloute became the first owner to establish racing divisions in as Jamaica, Trinidad and Tobago, and Barbados, emerging Jamaica's champion owner in 2008. Three year earlier, he was honoured by the local racing fraternity with the prestigious None Such award for his contribution to regional racing.

Haloute paid tribute to Nunes, who got him started in Jamaica racing, and also to TOBA President Howard Hamilton, Chris Armond, and Dr Steve Bennett.

The young Trinidadian Stephan Narinesingh, a protege of Haloute, is a part owner of several horses in partnership with him. He came to Jamaica for his first yearling sale in 2008 and purchased his first horse, STAMP OF AUTHORITY. His first winner locally, however, was GUAN YU, and since then, he has won 112 races in Jamaica and many more in his native Trinidad.

Nunes, who hails from a famous racing family, needs no introduction. He followed his late father, Nigel Nunes (a former champion trainer), into racing and also his brother Andrew, all three having the distinction of winning the Jamaica derby. Although yet to win the trainers championship, Nunes, who has finished second to Wayne DaCosta eight times, said he is hopeful that "one day, things will fall into place".

Other awardees were top T&T regional owner Basharan Bassawh, who also raced horses successfully in Jamaica, notaby two-time T&T Horse of the Year BIGMAN IN TOWN; the deputy chairman of Caymanas Track Limited (CTL), Andrew Azar, who owned and bred the 2008 T&T derby winner PRIDE AND GLORY and who was also recognised as a "man of action with a caring attitude" and for the beautification of Caymanas Park, along with former champion owner and CEO of Cal's Manufacturing Carlton Watson for his high-powered sponsorship of this year's derby.

A special award went to the visiting Guyanese delegation, which was here to attend the yearling sale for the first time. Master of ceremony was Chris Armond, assisted by former Miss Jamaica Kerrie Baylis. Guest speaker was American trainer, Brian Lynch.