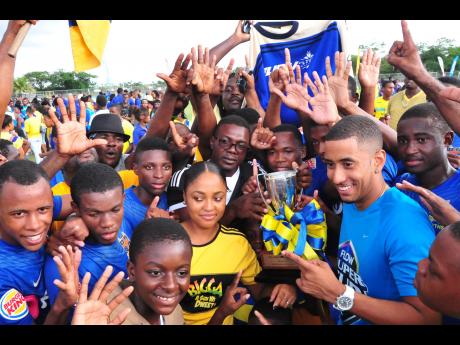 "This is certainly STETHS' era," declared Omar Wedderburn, the St Elizabeth Technical head coach after his team slammed Manchester High 4-1 in the ISSA/Flow Ben Francis Knockout final yesterday at the Juici Field in Clarendon to fashion a sixth-straight hold on the title.

Romeo Wright, the bustling central midfielder, was the surprise star for the champions with a double strike to stun Donovan Duckie's team into submission as STETHS retained the title they have now won since 2010.

STETHS was into the swing of the action early when Michael 'Diddy' Kerr netted from the penalty spot in the sixth minute, the result of an infringement inside the area. It was Kerr's 29th goal of the schoolboy season.

Wright, meanwhile, was having the time of his life alongside Kerr in an attacking role for STETHS.

But it was another reliable STETHS asset in Shawn Genus, who gave them back the lead when he stooped low down to head them in front at 2-1 in the 59th.

Duhaney Williams had equalised for Manchester in the 17-minute and the teams held that score into the half-time break.

Come the second half, and it was all STETHS as Wright exploded. His first of the evening put STETHS 3-1 ahead in the 71st minute when he slid the ball into the back of the net, beating Manchester goalkeeper Nicholas King at his near post.

He then made the game effectively safe for his team with a long-range effort that crashed against the far upright before nestling in the net at 4-1 in minute 80.

Wedderburn was elated with the win, but as usual, was reserved as he praised his relatively young team for the record-sustaining victory.

"It was a fabulous performance today! This is pedigree at its best, and while we take nothing away from Manchester, who I thought gave it their all, we just had more today, and we proved once again that once we play hard football, it is going to be difficult to beat us," stated Wedderburn.

Six titles in as many years has cemented STETHS as the undisputed kings of the Ben Francis Cup, and Wedderburn was not shy in calling it as he sees it.

"You can almost call this the STETHS Cup," he told The Gleaner. "It is an awesome feeling! Several of my players are 16 years old and have no experience of winning a title, so this is one for them," he said.

For Manchester, it was a third loss in the final against STETHS, who also bettered them in 2011 and 2013.

"I am very disappointed. We got our chances and failed to take them, and such is the game," Duckie said.

"I believe two of the STETHS goals were erroneously allowed when fouls in the build-up were not called by the referee," reasoned Duckie.