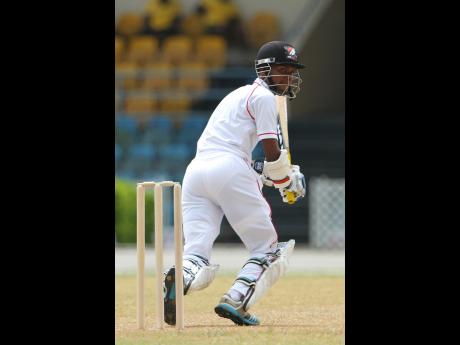 Former West Indies under-19 player Jeremy Solozano was leading a recovery by Trinidad and Tobago Red Force against Jamaica Scorpions at stumps on the first day of their rain affected third-round match in the Regional First Class Championship at the Queen's Park oval yesterday.

Solozano was unbeaten on 69 as Red Force rebounded from 69 for four to 145 for five at the close of play.

His intelligent knock, during which he struck six fours, was the highlight for the hosts on an overcast day in which an entire session of play was lost because of rain.

Only 57 overs were possible, 33 overs short of the target as rain which started during the lunch interval did not stop until after the scheduled tea break.

Red Force found themselves in deep trouble with poor shot selections, plunging to 48 for three after winning the toss and electing to bat.

Kyle Hope scored 30 at the top of the order, but he was one of three batsmen who fell victim to Dave Bernard Jr who threatened to destroy the innings, taking three wickets for 25 runs.

The Jamaicans dominated the morning session after Red Force lost their first wicket in only the second over of the day when opener Kjorn Ottley was bowled by Jason Dawes.

Bernard Jr then teamed up with wicketkeeper Chadwick Walton to have the next three batsmen caught behind, Hope for 30, Narsingh Deonarine for three and Yannic Carriah for two.

Yannick Ottley attempted to build a partnership with Solozano, but was interrupted by Marquino Mindley who trapped him lbw for 18.

Bad light stopped play with Steven Katwaroo not out on 13 providing support to Solozano.

Windward Islands Volcanoes, replying to Leeward Islands Hurricanes 24 for seven declared, were 104 for five at the close of the first day of their third round match in the Regional First Class Championship at Windsor Park.

Guyana Jaguars were 170 for two in their first innings against Barbados Pride at the close of the first day of their third round match in the Regional First Class Championship at the Guyana National Stadium here yesterday.