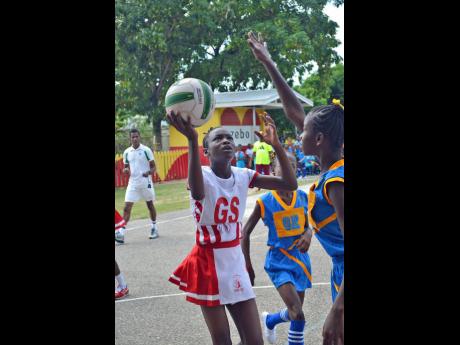 Portsmouth and Independence City Primary registered big wins in the fourth set of games in Zone One of the Institute of Sports (INSPORTS) Portmore Primary Schools Netball League at Waterford Primary last Wednesday.

Portsmouth defeated Gregory Park 15-5 to secure their fourth consecutive victory and advanced to the semi-finals as the top team in their zone with maximum 16 points. Trishana Gray (nine goals) and Shakera Barrett (six goals) scored for Portsmouth.

The long wait is over for young netballers as Horizon Park Primary School's rally will take place next Friday, November 27, on their school grounds, starting at 8 a.m.

The organisers said the event will be unique, thanks to the special arrangements and efforts of their sponsors.

Defending champions Passagefort United will tomorrow go in search of their fifth title as they oppose confident Ken's Wildflower in the final of the Colin Fagan-sponsored South East St Catherine Constituency Domino competition at Edgewater Community Centre, starting at 1 p.m.

Passagefort United booked their spot in the final with a 250-232 win over Waterford. Both teams were locked at 114-114 in semi-final action when a power outage caused an abrupt end to the match. The match continued from where it had stopped the following week.

Meanwhile, Ken's Wildflower cruised into the final as they downed Westmeade Rising Stars 250-227.

The semi-final pairings pit Spit Fyah versus Waterhouse United and Caribbean Classic against Giants. Both games will be played at Caymanas Park Limited, beginning at 11:00 a.m.

Defending champions Portsmouth and Waterford Primary advanced to the semi- finals of the Chubby/Institute of Sports (INSPORTS) Portmore Primary Football League with contrasting results on Thursday.

Portsmouth qualified from Zone One with 10 points from five games after they defeated Kensington 2-0, Waterford advanced from Zone Two with 11 points after they drew 1-1 with out-of-contention Belmont Park.

Naggo Head put themselves in a good position as they defeated second place Bridgeport (10 points) 2-0, and are on nine points with a game in hand.

In other games, Zone One team Gregory Park (eight points) kept their semi-final hopes alive with a come-from-behind 2-2 draw with out-of-contention Independence City Primary, which finished their fixtures on eight points. Port Henderson Primary jumped to six points from four games as they clipped Southborough 1-0.

The 2015-16 season of the York Pharmacy-sponsored Portmore Division Two Football Knock-out competition kicks off tomorrow with four games at two venues in the Sunshine City.

At the Racing Field, Racing host Daytona at 1 p.m. Braeton United and Edgewater square-off at 3 p.m.