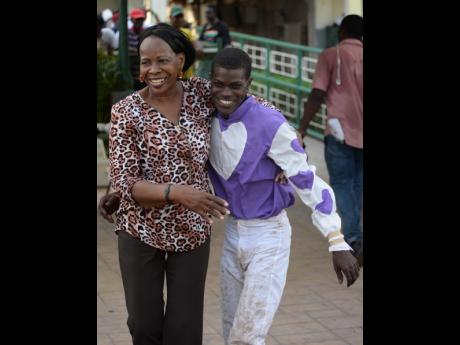 Harvey, a past student of Waterford High who started riding on September 26 after graduation from the Jockeys' School, became only the second apprentice from the latest batch of 17 to ride a triple. Linton Steadman holds the distinction of doing so twice, the more recent on the November 14 Superstakes Day programme.

Harvey booted home SIK THE BISMARK at 9-5 for trainer Victor Williams in the fourth race over 1300 metres, followed by GANJA MAN at 12-1 for dreadlocked trainer Terrence McWhinney in the sixth race over the straight for maiden three-year-olds and PRINCESS SALLEMA, who held on by three-quarter length from the fast-finishing 2-1 favourite TERRA MARIQUE.

Harvey, who is apprenticed to big-race trainer Richard Azan, could not contain his glee.

"For me, it's a marvellous feeling and I will continue to work hard to maintain my fitness level and weight," added the promising 20-year-old.