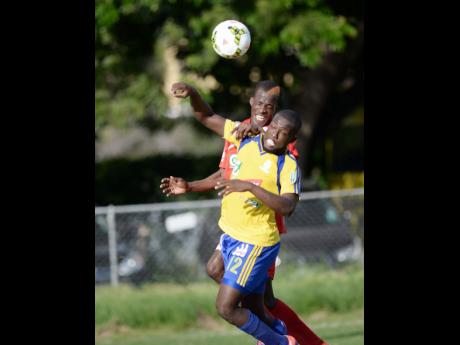 The last time defending champions Arnett Gardens faced Cavalier the more-fancied team was taught a lesson by Cavalier, and today, when they meet again, coach Jerome Waite will be hoping that his Arnett Gardens team will set the record straight.

"It is a most-improved Arnett team. As you all know, we started out slow and we have seen a lot of improvements. Currently, we are in third spot so we expect a much-improved performance. Definitely a win, that is what we are aiming for, three points," a confident Waite told The Gleaner.

"Big win is not important, three points is what is important. Whatever happens in the game, the objective is to ensure that we get three points," he added.

Cavalier manager Toni Cowan believes her team is in a good place and just need to correct a few things.

"The only thing I think we need to do differently is finish our chances as a team. The last encounter that we had we had the better chances and just weren't putting them away, so hopefully, this Sunday we can put them away," a hopeful Cowan said while reflecting on their draw with Tivoli Gardens last time out.

It will take more than hope and wishful thinking to get the goals for Cavalier as whenever Chevonne 'Messi' Marsh is not in the team, as was the case on Monday, Cavalier struggle.

"We have been putting in extra work on the training ground as it relates to finishing our chances, it's a problem that we have had from the season before, coming into this season as well. We create opportunities, but just not put them away, that's what we have to do," Cowan said of their efforts to improve.

Former leaders Montego Bay United could not have asked for a better match to get over their blues, following their loss last week to second-place Portmore United. Their opponents, UWI FC, have shown a lot of fight, but appear to lack the required quality to shake things up at this level. Montego Bay United should look towards Dino Williams, Owayne Gordon and Allan Ottey to fire them to a victory, while Girvon Brown should lead UWI FC's charges.

Rivoli United will play their second home match in St Ann when they host title aspirants Portmore United at Drax Hall, while Tivoli Gardens and Boys' Town will battle it out in the Western Kingston derby at the Edward Seaga Sports Complex.

Waterhouse's rebuilding job will continue with the visit of former pacesettters Reno, while Harbour View and Humble Lion will take centre stage on Monday night at Harbour View Stadium.