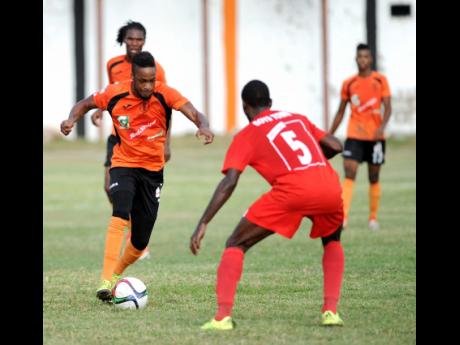 Miguel Ricketts fired the home team in front after 22 minutes, but Peter Keyes equalised for the 'Red Brigade' on 62 minutes.

However, Flemmings latched on to a pass late on and hammered a low shot past Mikhail Harrison in goal.

It was only Flemmings' second west Kingston derby at senior level, but as a resident of the community, he knows all about this fixture.

"Tivoli Gardens playing Boys' Town or Arnett Gardens is always a tough one, but we really did well. We dug deep to come out with the win, so kudos to the team," the young striker told The Gleaner.

His experience from his recent call-up for the Panama and Haiti World Cup qualifiers was a great learning curve, and he was eager to show what he had learned.

"Being around the professionals in the national team, I really learned a lot, especially from the ones overseas, and I said that I have to transfer that mental aspect to my game and my approach to life, and I am getting there. I just have to keep working hard," he reasoned.

"It is not easy to leave schoolboy football and come into the Premier League playing against bigger, stronger guys with more experience. But I came here and worked and left the rest to God, and game by game, I will continue to work hard and, hopefully, the goals will come," he said.

Tivoli went ahead when Ricketts turned his marker and fired past Harrison. Carlos Wright thought he had found the equaliser minutes later, but he was offside. However, little past the hour, Peter Keyes fired a deflected shot past Edsel Scott from a quickly taken free kick.

Boys' Town were the stronger team after that and looked more threatening, but Flemmings broke away and fired a ferocious shot past Harrison to seal the win.

Meanwhile, Portmore United climbed to the top of the standings after a 3-2 win over St Catherine rivals Rivoli. Portmore now have 27 points, two more than MoBay United, who were held 0-0 by UWI. Waterhouse and Reno drew 2-2.