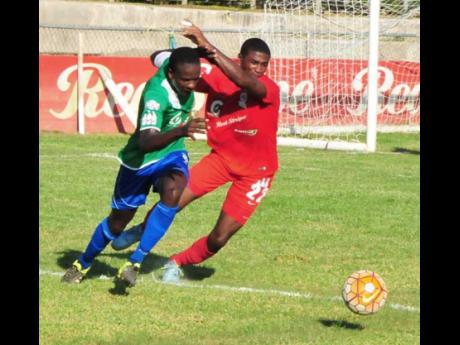 Montego Bay United (MBU) lost their front-running status in the Red Stripe Premier League, as they were held to a goalless draw by lowly UWI at Westpow Park to slip to second in the standings behind Portmore United.

Portmore are in front of the field on 27 points, two more than MBU, who were seeking a return to winning ways, following their failure to win away last week.

In a rather lethargic match, it was the visiting UWI team that looked more settled although neither side was able to make a mark in the match.

"I am not happy with how we played but I am happy for the fact that we did not lose the match. A point is always better than none, so I will take that," said MBU assistant coach Loxley Reid.

Top striker Dino Williams had an off-day. His best chance coming in the second half, when he flashed a shot at goal but saw it blocked by a defender.

NO SPARK IN MIDFIELD

Williams had little service on which to mount a serious attack, as for once, the MBU midfield failed to spark, except on occasions when Donovan Carey, who once again had a good enough day on the right flank.

His work rate and quality on the ball, coupled with Williams' darting runs, could have worked magic for MBU had there been enough forward possession, but UWI were content in letting them control the flow of the game in the first stanza.

Little changed in the second half but the visitors showed more grit in midfield and had a few opportunities themselves to strike at goal.

The point gives them 13 points but they remain in the relegation battle, something their assistant coach Andrew Peart insists had to change.

"It is our desire to remain in the league, so while a point away from home is good in the circumstances, I believe we need to start winning our games to escape relegation," Peart said.

"We got a few chances today and so we can always build on those. I am pleased with our overall performance and accept a point today," he added.