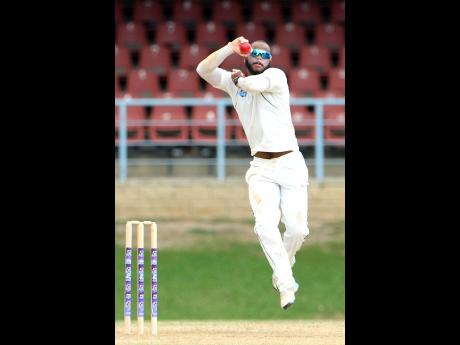 File
John Campbell bowls his off-spin during the final day of the third round match between Trinidad & Tobago Red Force and Jamaica Scorpions in the WICB Professional Cricket League Regional 4-Day Tournament at Queen’s Park Oval in Port of Spain, Trinidad, yesterday.

Set 156 for victory on the final day of the third-round match at Queen's Park Oval, Scorpions were safely guided to their target by opener Campbell, who hit 83 in a mature innings.

The 22-year-old had earlier added three more wickets to his overnight four as Red Force, beginning the day on 87 for four, were dismissed for 175.

Campbell, a part-time off-spinner, finished with career-best figures of seven for 73 to ensure the hosts lost their remaining six wickets for just 88 runs.

Campbell then ensured there would be no hiccups by anchoring a series of small partnerships throughout the Scorpions' run chase.

The left-hander, who faced 150 balls in 2 3/4 hours at the crease and gathered seven fours, put on 41 for the first wicket with captain Paul Palmer, who scored 17, and then added a further 45 for the second wicket with Barbadian Kirk Edwards, who hit 20 off 43 balls.

Campbell posted 39 for the third wicket with first-innings century-maker Andre McCarthy, who made 17, a partnership which pushed Scorpions past

the 100-run mark and closer to victory.

With the victory, Scorpions moved into second spot with

AT GUYANA NATIONAL STADIUM: Left-arm spinner Gudakesh Motie picked up his third five-wicket haul in four innings to hurt Barbados Pride and send them crashing to a nine-wicket defeat on the final day yesterday.