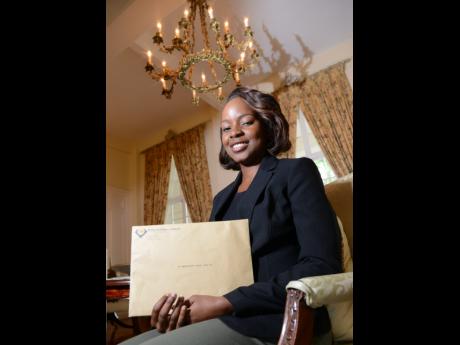 As sportS fans around the world reel from revelation after revelation that there is a legitimacy crisis in sports governance, news last week that the 2016 Rhodes Scholar award went to a 24-year-old woman from Clarendon named Sherona Forrester was welcome relief.

This young lady from Clarendon epitomises all the attributes recommended by the Rhodes committee.

Forrester has been shown to be not only an economics genius, but her life story to date has revealed that it is possible to combine academic work, sports, and community involvement without sacrificing any personality traits.

Forrester has represented this nation at football and singing, as well as being involved (at leadership level) in countless other activities that makes a youngster's life worthwhile.

I listened in awe to an interview with her on a local radio station last week and wished that her story could be printed and distributed to all schools under the purview of the Ministry of Education as it shows that you can grow where you are planted.

Our 2016 Rhodes Scholar grew up in a rural community and went to school in her vicinity.

After earning a place at Glenmuir High, Forrester spent her secondary school life there, and achieved excellence in every sphere of curricular and extra-curricular activity on offer at the school.

Her story must have been a dagger to the hearts of all the proponents of school transfers to enhance the potential of child athletes. You can grow where you are planted.

Congratulations to Ms Forrester and the Ministry of Education "Keep up the pressure!"

The transfer of students primarily to enhance a school's sporting record is wrong, and perpetrators need to be exposed and sanctioned.

I have been made aware of a report from the Danish Institute of Sports Studies, authored by one Dr Arnout Geeraert, where he looked at (and ranked) sporting federations around the world based on how transparent, democratic, and accountable they were. He has found that the international sports governance system is deeply flawed.

By design, international sporting organisations do not allow stakeholders to monitor and sanction decision-making members. None of the associations studied published per diem payments and bonuses given to senior officials. None has term limits for their president.

In Jamaica, when you think of (and remember) the fisticuffs, subterfuge, slandering of opponents' character, and other nefarious activities that surround the elections for presidents of our sporting associations - a non-paying job - and the point-blank refusal to step down in the face of genuine concern and criticism of fans, the impression is that we need to do something about our own problems. Something is indeed rotten, and it is not only in the state of Denmark!

the chairman of a Caricom Committee chaired by the prime minister of Grenada is impatient of a solution.

Readers may recall that a committee set up to look at the governance structure of West Indies cricket, with majority members nominated by the WICB, found that the president and his executive body should immediately be dissolved and an interim body set up to administer cricket in the West Indies.

The president, Dave Cameron and his executive, after agreeing to abide by the findings of the committee, is now using every ploy known to man to extend the life of their board. Interesting times are indeed ahead. I hope that when the smoke clears, the will of the people of the Caribbean will prevail.

We need term limits, annual salaries, and published audited accounts for all of our sporting organisations. Nothing else will do.