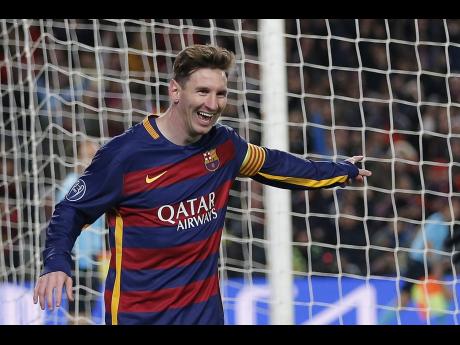 There were goals galore in the Champions League yester-day as Barcelona and Bayern Munich advanced to the knockout stage and also secured top spot in their groups.

"It's tough to get back up to full speed," said Messi. "I prepared well and trained, but it's not the same as going out on the pitch and lasting 90 minutes. I will take it with calm and get my pace back."

Victory moved the Spanish club on to 13 points at the top of Group E with a game to spare. Roma were left with five points along with Leverkusen, while BATE have four.

Bayern routed second-placed Olympiakos 4-0, despite playing almost 40 minutes with 10 men, to ensure they will finish top of Group F, while Chelsea won by the same scoreline at 10-man Maccabi Tel Aviv in Group G. Chelsea's win and Porto's 0-2 loss to Dynamo Kiev tied the first two teams on 10 points, two more than Kiev.

Bayern top Group F with 12 points and cannot be dislodged with one match remaining.

Arsenal beat Dinamo Zagreb 3-0 to keep alive their chances of progressing. Arsene Wegner's side must beat Olympiakos 2-0 or by a one-goal margin of at least 3-2 due to the head-to-head formula used by UEFA to separate teams. Alexis Sanchez scored twice and set up Mesut Ozil for Arsenal's first goal. Arsenal are third, three points behind Olympiakos with nine.

Zenit St Petersburg secured top spot in Group H with a 2-0 win over Valencia, while Gent maintained their chances of qualifying after winning 2-1 at Lyon. Gent have seven points, one more than Valencia.