Jennifer Ellison Brown: A look at the circulatory system 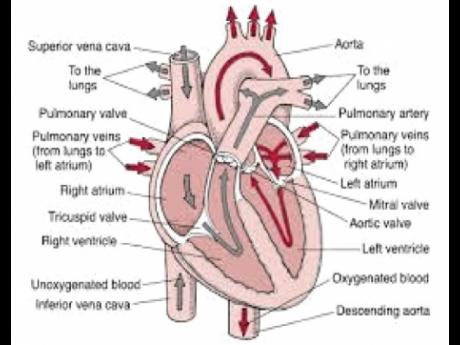 The heart has four chambers. Two upper chambers called atria (singular; atrium) and two lower chambers called ventricles. The heart is divided down the middle into two parts by a wall called the septum. There are two valves between the atria and ventricles: the bicuspid and tricuspid valves that prevent blood from flowing back to the atria from the ventricles. There are also two semi-lunar valves between the heart and the arteries that prevent the back flow of blood to the heart from the arteries.

- A heartbeat is one complete cycle.

- The heart rate is the number of beats per minute.

- The stroke volume is the amount of blood pumped from the left ventricle in one heart beat.

The cardiac output to the body increases during exercise as a result of increase in heart rate and stroke volume. The working muscles, therefore, receive much more blood and much more oxygen and nutrients. Also heat, carbon dioxide and lactic acid are carried away from the tissues more quickly. The heart gets stronger as a result of all the extra work it has to do during exercise.

A network of very thin-walled blood vessels called capillaries take the blood from the arteries to the tissues of the body, where various exchanges occurs between the blood and the cells of tissues. For example, oxygen, water, nutrients, antibodies and hormones are diffused from the blood to the tissues and carbon dioxide is diffused away from the tissues back to the blood.

After having passed through the tissues in the capillaries, the blood returns under low pressure in the veins to the right atrium of the heart. Veins have thinner walls than arteries and have pocket valves along their length, which prevent blood flowing back under gravity.

If people stand still too long, gravity can prevent proper flow of blood to the heart. This leads to less oxygenated blood reaching the brain, causing a person to faint.

Blood consists of the fluid plasma, which contains dissolved substances such as glucose and proteins, making 55 per cent of blood volume.

Suspended in the plasma are red blood cells, white blood cells and platelets making 45 per cent of blood volume. The blood transports substances and heat around the body and is a defence against infection.