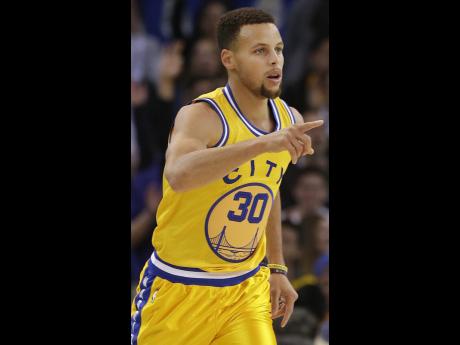 The defending champions, Golden State Warriors, set the record for best start in NBA history at 16-0, as Stephen Curry had 24 points and nine assists in a 111-77 rout of the Los Angeles Lakers on Tuesday night.

With their coach sidelined, the Warriors surpassed the 15-0 starts by the Washington Capitols of 1948-49 and 1993-94 Houston Rockets.

"It's a special accomplishment anytime you can do something that hasn't been done before," Curry said. "It's not going to be total dominance for 82 games."

Draymond Green added 18 points, seven rebounds and five assists as the Warriors extended their team-record home-winning streak to 27 games, with coach Steve Kerr watching from behind the scenes while recovering from complications following two back surgeries.

Kobe Bryant shot one of 14 for just four points, matching the worst-shooting performance of his career in a game where he had at least one basket. The Lakers dropped to 2-12 with the second-worst record in the NBA.

Elsewhere, Indiana made a club record 19 3-pointers in a 123-106 win over Washington, the Los Angeles Clippers ended a three-game losing streak with a 111-94 victory over Denver and Atlanta routed Boston 121-97.

In other games, Mike Conley scored 21 points and Jeff Green added 19 to lead seven Memphis players in double figures in the Grizzlies' 110-96 win over Dallas. Marc Gasol had 15 points and 10 rebounds for Memphis, which won their fifth in the last six games.

Chicago's Jimmy Butler scored 22 points and Derrick Rose added 17 in his return to the line-up as the Bulls held off Portland 93-88. Rose had missed two games with a left ankle injury.