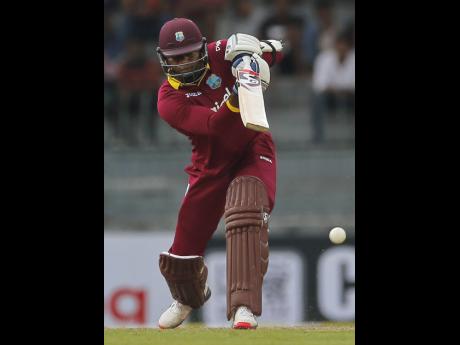 Opting to bat first at the Sher-e-Bangla National Stadium, Riders cruised to 176 for six off their 20 overs, with the right-handed Simmons top-scoring with 51 off 39 deliveries.

In reply, Dynamites got a top score of 29 from Sri Lankan star Kumar Sangakarra, but their innings never really got going, and they were bowled out for a disappointing 107 in the final over.

With the victory, Riders joined Barisal Bulls and Comilla Victorians atop the standings, with four points from two wins and one defeat.

Simmons was in great nick, striking five fours and three sixes to get Riders off to a flying start. He put on 38 for the first wicket with Soumya Sarkar who hit 18 from 10 balls, before adding a further 56 for the second wicket with Mohammad Mithun, who made 34 from 32 deliveries.

Simmons perished in the 11th over, but Thisara Perera struck 27 from 20 balls and Shakib al Hasan an unbeaten 24 from 15 deliveries to keep the innings flowing.

Darren Sammy, however, made just three batting at number five.

Al Hasan then destroyed the Dynamites innings with his left-arm spin, taking four for 16, while seamer Thisara Perera claimed three for 25.

Sammy went wicket-less from his two overs, which cost 10 runs.

On Tuesday, West Indies batsman Marlon Samuels blasted an unbeaten 69 from 52 balls - with eight fours and one six - to help Victorians chase down 177 and beat Chittagong Vikings by seven wickets, also at Sher-e Bangla.

Victorians were struggling at 54 for three in the eighth over before Samuels put on 123 in an unbroken fourth wicket stand with Mashrafe Mortaza (56 not out) to pull off the win.