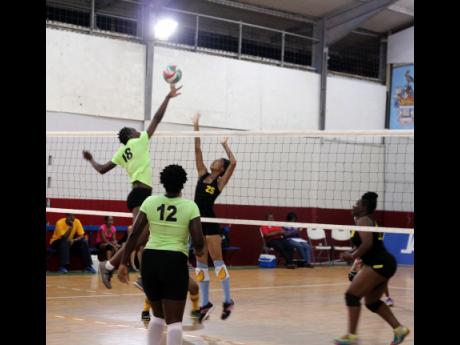 Contributed
Shannika Johnson (left) of Viqueens attempts to ‘dunk’ the ball at the net while a member of the Blackbirds team from Barbados rises to counter her move during a preliminary, round clash in the UWI Pelican Volleyball Invitational at the UWI Mona Gymnasium last Friday.

Two new champions were crowned following some riveting final-day action on Sunday, November 22, at the 10th University of the West Indies (UWI) Pelican Volleyball Invitational tournament held at the gymnasium at the UWI Mona Bowl.

Both pre-tournament favourites and defending champions were knocked from their top positions thanks to some breathtaking on-court action. When the curtains came down, it was the GC Foster College that reigned supreme in the female section with a 3-2 win over UWI, while the UWI male team dethroned perennial champions Vikings 3-1 to complete the day of upsets.

The female final proved to be a spectacle that had fans standing for almost every second of the match. Led by captain Tasha-Gaye Richards and former national beach volleyball representatives Cherine Richards and Cheryl Daley, UWI got off to a dominating start, taking the first set 25-17. GC Foster showed their worth, and thanks to strong play from their own influential captain Scott, clawed their way back into the match with a 26-24 second-set win.

GC Foster then took the ascendancy, dominating play, but were denied a 2-1 lead as UWI fought back to claim the third set 26-24. The fourth set proved to be the best set of the championships, with UWI jumping out to an eight-point lead at 16-8 before GC Foster fought back to level the game at 22-22 and then went on to win 31-29 before sealing victory with a 15-13 final set.

In the male final, UWI got off to a dream start against the champions, taking the first set 25-23 before falling 25-22 in the second. With both teams tied at a set apiece, the intensity of play doubled in set three, which saw the teams tied at 24-24 before UWI came out 34-32 winners to take the 2-1 set lead.

The third set proved a telling one as UWI continued their dominant play into the fourth and took an early lead before Viking fought back to level the score at 24-24 yet again. However, the UWI team clinched the final with a 26-24 fourth-set win and a 3-1 match score.

"We really wanted this one. They (Vikings) have always been our Achilles heel, and we spoke ahead of the game that this year, we would come out here and try to dominate them in all aspects of the game, from our serving to net play to our blockers up front," said O'neil Ebanks, coach of the UWI Pelican male team.

The tournament was being held for the 10th year after being inaugurated in 2012 and is staged as a means of giving local players international experience. This year, players from Guyana, Curacao, the Bahamas, and Barbados participated.