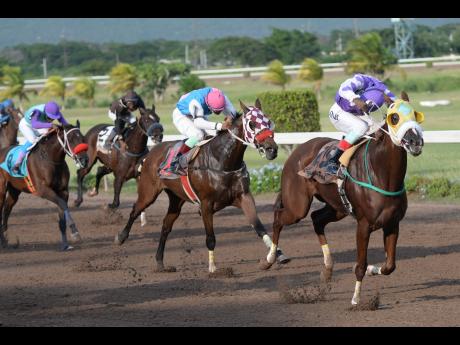 The Supreme Ventures 2-y-o Triple Crown series of three races marks its second leg at Caymanas Park today, with the 11th running of the $3.6 million Pick-3 Super Challenge Trophy over 1400 metres, to be contested by nine starters.

Despite the presence of the Wayne DaCosta-trained DREAMLINER, who ran on strongly to win the opening race of the series - the $2.95 Cash Pot 'Only One For Me' Trophy over 1200 metres on October 19 - the series takes an interesting turn with the presence of the unbeaten juveniles ZUGULU and SIMPLY THE BEST. Both were impressive in separate two-year-old races - 90 minutes apart - on November 14.

Racing for the first time and all the rage, the Philip Feanny-trained filly, SIMPLY THE BEST, showed tremendous speed over 1100 metres to win in the fast time of 1.06.3 behind splits of 23.2, 46. 4 for the half mile, with veteran jockey Ian Spence aboard.

The talented filly by Adore The Gold out of Supa Lei will report even better for this race, and although up against the cream of the crop, will only go down fighting.

ZUGULU, on the other hand, is unbeaten in two starts, having romped the Coca Cola Juvenile Sprint over 1300 metres on November 14, this after delaying the start for eight minutes by his refusal to enter the gates.

Trained by Richard Azan, the dark bay colt by Hold Me Back out of Candy Girl was eventually forced into the gates by some weary gate attendants, but once in, broke smartly on the outside to make all impressively, winning by 51/2 lengths from JAMAI RAJA, who renews rivalry today.

Prior to the Coca Cola Juvenile Sprint, ZUGULU missed the Cash Pot 'Only One For Me' Trophy on October 19, having flipped over in the starting gate as the howling favourite and injuring himself. And before that, he bolted at the start on his intended debut some months ago.

Azan concedes that while his colt has a touch of class, he is concerned about his recurring problems at the start.

"He could well be the best two-year-old seen out so far, but I am concerned about his inability to settle down at the start," he said.

"I think he has secured a good draw on the outside and having worked well, my hope is that he will calm down. Given the high expectations, it would be unfortunate were he to miss another race in the Supreme Ventures series due to his unruly temperament, but I am hopeful," added the trainer.

Stable companions DREAMLINER and FUTURE KING, first and third, respectively, in the Cash Pot Only One For Me Trophy, are expected to give a good account of themselves, but the focus will definitely be on the hot duo, ZUGULU and SIMPLY THE BEST. ZUGULU, despite his problems at the start, is given the edge over this extended trip.

I also like the speedy 3-y-o, SMOKEY TOPAZ, in the first race over 1100 metres; MEET JUSTIN in the second; down-in-class BARS OF GOLD in the fourth; CHIEF SECRETARIAT in the sixth; and REGALLY BOLD in the ninth over the straight.