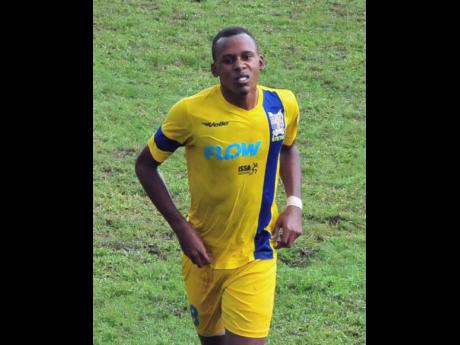 File
Defender Neville Graham of St Elizabeth Technical (STETHS) was instrumental in his teams victory yesterday. Grahams stunning free kick two metres inside the oppositions helped to seal a 2-1 win over Lennon High and a place in the December 5 ISSA-FLOW daCosta Cup final.

The winners will face Dinthill Technical High in the December 5 final. The Santa Cruz-based STETHS will now have a chance to add the biggest title of them all - the daCosta Cup - to their Ben Francis Cup win and keep them on track to winning three of the four schoolboy titles on offer.

Graham, the STETHS left-back, has been playing like a man possessed all season and was all over the field, grimacing as a result of a leg injury that he has been playing through. Like an injured soldier, he battled on to score the opening goal in the 19th minute.

His teammate and the competition's deadliest striker, Michael Kerr, netted his 29th goal of the campaign from the penalty spot in the 66th minute, as STETHS regained the lead after Shawayne Nelson had equalised for the Merron Gordon-conditioned Lennon.

It was yet another familiar outcome for STETHS as they seem always able to create goals and wins.

Lennon hit back in the 50th minute after STETHS had taken the lead.

Nelson outran his marker and struck a low, hard shot under STETHS goalie Kenroy Wallace to level the score at 1-1.

But STETHS found the winner, when Kerr slotted home from the penalty spot, after the referee penalised Lennon for a handled ball in the box.

STETHS came close to making it 3-1. Graham's shot from an acute angle in the 77th minute had Lennon goalkeeper Shevoy Williams in serious trouble, but the ball failed to dip sufficiently and crashed against the crossbar, much to the relief of the entire Lennon squad and their band of supporters.

A venue for the final is expected to be announced early this week by ISSA.