A Star shines at the Park 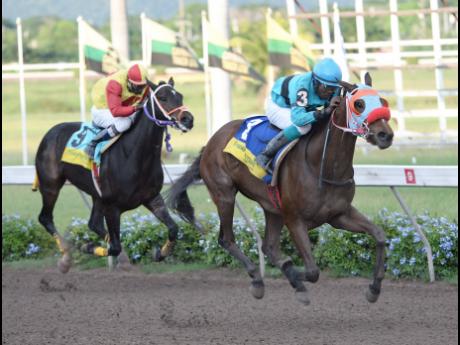 Running at odds of 4-1, SORRENTINO'S STAR, a maiden at the start, made amends for her close fourth to DREAMLINER in the October 19 Cash Pot 'Only One For Me' Trophy over 1200 metres (race one in the series), turning the tables on Wayne DaCosta's DREAMLINER, who could only manage fourth over the longer distance of the PIck 3 Challenge.

SORRENTINO'S STAR raced close up on the rails as the previously unbeaten ZUGULU, the 6-5 favourite, led comfortably from SIMPY THE BEST (5-2) leaving the half mile. However, ZUGULU, with Shane Ellis aboard, was joined by the smooth running SORRENTINO'S STAR on the outside entering the straight. He quickly disposed of ZUGULU to win by 13/4 lengths from the late-closing FUTURE KING (3-1) widest of all with top apprentice Linton Steadman aboard.

A bay filly by Sorrentino out of the Touch Gold mare Santa Baby, SORRENTINO'S STAR was notching her first win on this her fourth start. She is owned and bred by Robert Dabdoub.

Nelson, who recently returned home following a stint at Woodbine racetrack in Toronto, Canada, said he couldn't believe that SORRENTINO'S STAR was a maiden.

"I had been working her in the mornings in preparation for the races and she responded well," said the three-time champion jockey. "The trainer instructed me to break her sharply and stay as close to the pace as possible She's a nice filly and I'm looking forward to riding her again on Boxing Day," added Nelson, who will ride the American horse UPPA TUNE in next Saturday's $13.5 million SVL Diamond Mile.

Meanwhile, Melissa Ward, riding 9-2 chance FIFTYONE-STORM in the eighth race, became the first of the three female apprentices who graduated from the Jockeys' School on September 26 to ride a winner against senior jockeys. And former champion jockey Wesley 'Callaloo' Henry high-lighted the 11-race programme with a fabulous four-timer, this on a day when the Michael Beecham-trained SIR BUDGET scored a 52-1 upset in the ninth race over the straight, then had to survive a stewards' inquiry and objection.