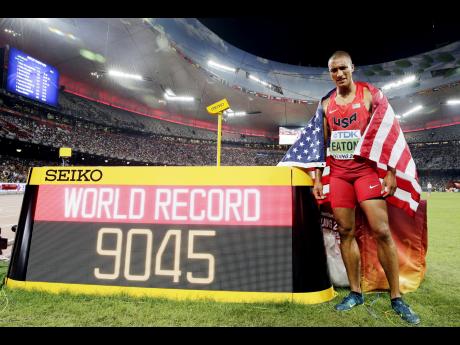 In 20 of the 28 times when the International Association of Athletic Federation (IAAF) has presented its male Athlete of the Year Award, it has been won by a man who has set a world record in the season under consideration. That may satisfy Jamaican curiosity as to why Usain Bolt did not receive the IAAF award this year. It, instead, went to Ashton Eaton, the American decathlete.

At the 15th World Champion-ships, the tall Jamaican won a highly anticipated double-sprint clash against Justin Gatlin. Bolt squeezed past to take the 100 metres by 0.01 seconds and later cruised to victory in the 200, winning in 19.55 seconds, the fastest time in three years.

At the same championship, Eaton raised his own decathlon world record to win the gold medal over Canada's Pan-American Games winner, Damian Warner. The new mark, 9045 points, included a 45 seconds flat dash through 400 metres. It was only the third time the 9,000-point threshold had been attained.

With both men having injury-affected seasons, the world record seems to have given Eaton the edge over Bolt and the other man under final consideration for

Injuries restricted Bolt to a three-meet season in the 100m and just four in the 200m. For the same reason, Eaton managed just to start just one decathlon. That was his record performance at the World Championships.

By comparison, Taylor triple-jumped seven times, cleared 18 metres in three different meets, and scared the Edwards world record. He and Eaton dabbled elsewhere, producing long jumps measured at 8.18m and 8.03m, respectively, and with the decathlete also running the flat 400m in 45.54 before the Worlds.

Eaton is now in illustrious company. Carl Lewis, Roger Kingdom, Steve Backley, Kevin Young, Colin Jackson, Noureddine Morceli, Edwards, Wilson Kipketer, Haile Gebreselassie, Michael Johnson, Kenenisa Bekele, Asafa Powell, Bolt, David Rudisha, and Renaud Lavillenie have all won the award in seasons they punctuated with world records. In fact, this was the case for every winner of the award from its first year in 1988 to 1999.