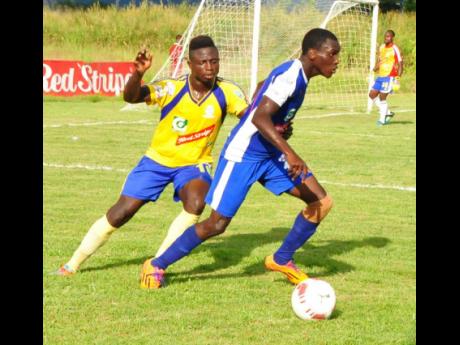 Denmark Gillings had a man-of-the-match performance, scoring his first goal of the season for FC Reno in their 1-0 victory over Harbour View FC, lifting his team to sixth in the Red Stripe Premier League standings.

It was their first win in six matches and snapped a series of drawn games that resulted in them sliding into the pack. They are also one point ahead of Harbour View and Boys' Town, who defeated Arnett Gardens 1-0 yesterday.

"Both teams played tactically well, and the win will give us a good feeling for our next game against Tivoli," cited Reno technical director Wendell Downswell.

"It augurs well going forward that we start winning our matches, especially the ones played at home, and today, we did that thanks to that wonderful goal from Gillings," added Downswell.

The pace of the game, particularly in the first half, was nothing to write home about, with the visitors enjoying the better of play.

Harbour View had only two shots on goal despite having the lion's share of possession, and although Nicholas Beckett looked comfortable in midfield, it amounted to little as the Reno defence held firm.

Reno handed goalkeeper Dennis Clayton his first start after a long layoff due to injuries, and he did well to keep the score even with a spectacular one-handed save to deny Jorginho James in the 12th minute. Clayton was at full stretch to tip James' effort over the crossbar with Harbour View threatening.

Reno holding-midfielder Romario Downswell had a chance to score, but his header was narrowly off target in the 17th minute.

In the second half, Gillings scored from 30 yards out, driving his free-kick out of reach of Harbour View goalkeeper Devon Haughton in the 48th minute.

"This is not what we planned at all, coming so far," said Harbour View coach Ludlow Bernard.

"We talked about getting the maximum points from this game, but it was not to be as Reno defended well," he said.